An increasingly beleaguered President Robert Mugabe has gagged senior party officials from making public statements on issues he has already publicly spoken about. 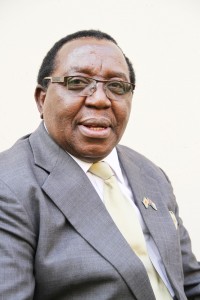 The only person who has some free space in commenting is the national spokesperson (Simon Khaya Moyo).

Prominent Zanu (PF) members confirmed to The Zimbabwean that Mugabe had issued the gag order to tighten his grip on power and avoid further instability in the ruling party that is ridden by rifts. The no-comment directive was reportedly ratified at a recent politburo meeting where it was noted that some party members were undermining or contradicting statements made by their leader.

No comment
â€œThe politburo was used to formally uphold an order that the president had already made. He expressed a concern that some party members, including those in the presidium, were taking his words out of context or simply distorting what he had said.
â€œAs a result, we are not allowed to speak or comment on what President Mugabe would have said in public unless we have been authorised to do so. The only person who has some free space in commenting is the national spokesperson (Simon Khaya Moyo) but even then, he must just repeat what would have been uttered and make no further comments,â€ said a member of the central committee.
The move, said the source, is meant to solidify Mugabeâ€™s one-centre-of-power concept adopted at the December 2014 congress. The central committee resolved then that all power must be centred in Mugabe, with his deputies serving only as rubber-stamping assistants. The president reiterated this position when he swore in his new deputies, Emmerson Mnangagwa and Phlekelezela Mphoko, at congress.
â€œEven they (the deputies) will have no power to make decisions. They will only serve as my assistants,â€ Mugabe said then.

Anxious
This followed the purging of former vice president Joice Mujuru, and other party heavyweights who were accused by the Mnangagwa camp, with the assistance of Mugabeâ€™s wife Grace, of attempting to unseat Mugabe through unconstitutional means.
This group, which comprises a significant number of former party heavies, has since transformed into the People First movement, which is hoped to become a political party under Mujuruâ€™s leadership. But so far no such move has been made. â€œIt seems Mugabe is increasingly anxious to show that he is the man in charge. There are so many divisions in the party and he wants to send out a clear message that he is the centre of power,â€ said the central committee member.
Mugabe was led to believe that the one centre of power would remove factionalism and instability in the party. However, he and his wife have since acknowledged that disunity remains rife in Zanu (PF) in the post-congress period, with people rallying behind either of the vice presidents in the race to succeed him.

Generation 40
Before congress, there were two dominant factions led by Mnangagwa and Mujuru. But recent reports indicate that young party members have also formed a loose grouping calling itself Generation 40 (G40) that is positioning itself to succeed Mugabe ahead of the 2018 general elections.
A second party member said as a result of the gag, senior party members were declining invitations to talk at public forums. Recently, some members declined to appear at a civil society talk shop to discuss Mugabeâ€™s state of the nation address – saying they could not comment because Mugabe had already given his views.
â€œIt is now risky to be seen talking at public forums because you can easily become a victim. It is therefore safe to keep your distance as you might be seen as creating another centre of power,â€ said the second source.
Mugabe is reportedly afraid of the possibility that some party members not happy with his continued rule might use such public platforms to tarnish his image and expose his weakening hold on power.

Bootlickers
â€œOf course, this is not good for internal democracy. It looks like an attempt to tighten party dictatorship. The gag will only succeed in turning all of us into bootlickers,â€ said the source. He predicted that the debate on the state of the nation address would only be characterised by praise singing for Mugabe â€œwith more vigour than we have seen in the pastâ€.
Senior Zanu (PF) members are said to have already been warned against giving interviews to the media, particularly foreign journalists. Mnangagwa, however, recently featured in a wide-ranging interview with the New African run by Baffour Ankomah from the UK.
In the interview, published by the state-controlled media, Mnangagwa claimsed that Zanu (PF) was a democratic party that allowed its members to air their view so as to display their wisdom or foolishness.
â€œZanu is democratic. If you create a democratic situation where people are allowed to think freely, people will not agree on anything, and this is where the healthiness of the party is. This is why the party has survived for 52 years now. It is because we allow internal debate. People debate, they disagree, agree, and agree to disagree. Others get thrown out. But when it comes to issues, we differ in order to arrive at the best solution for the party, the best way forward, the best way to arrive at the correct line to preserve the party, the best way to lead the people. It is creating the environment where you are allowed to air your foolishness or wisdom,â€ said Mnangagwa.
Many party stalwarts who have publicly or internally disagreed with Mugabe have been booted out or demoted. These include the late Eddison Zvobgo, Dzikamai Mavhaire, the late Edgar Tekere and Margaret Dongo.