Former deputy president Joice Mujuru on Monday outlined her vision for a transformed Zimbabwe, giving a clear signal that she is ready to get back into politics as the leader of the People First movement. 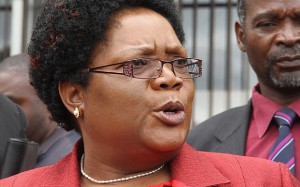 She announced that since she made her last terse statement in June, â€œwe have been hard at workâ€ on the blueprint that represents â€œhow we propose to translate our vision for a better Zimbabwe into realityâ€.

The policy entitled Blueprint to Unlock Investment and Leverage for Development (BUILD) hinges on five clusters. â€œZimbabwe belongs to all people who call it home, regardless of colour, creed, disability, gender, race or religious background. Together we can BUILD Zimbabwe into a modern democratic state, with a vibrant economy where every citizen is responsible for peace, freedom, democracy and can prosper.

â€œZimbabwe is part of the global village. We shall ensure that our policies are informed by its sovereign interests viewed in the context of the current modern global geopolitical context,â€ reads the blueprintâ€™s preamble.

Mujuru said her formation would organise, promote and support full stakeholder participation in order to rebuild the country. The group says it is composed of national democrats who are guided by the values of the liberation struggle, self-determination, self-dignity and self-pride expressed through the adoption of market-driven policies under a constitutional democracy where the state acts as facilitator and regulator.

The first cluster of the policy document deals with constitutionalism, underscoring the need to respect equality before the law, the supremacy of the people legal charter, the promotion of and respect for the separation of the judiciary, executive and legislature.

â€œWe shall respect and restore the role of traditional leaders as prescribed by the Constitution. The civil service shall be apolitical, and we shall promote meritocracy and professionalism.Â  We shall encourage e-government throughout the service to achieve set targets by set timelines and curb corruption,â€ reads the document.

The movement will also promote accountability and transparency by giving the Auditor General more resources and authority to initiate or recommend criminal prosecution, review the State Procurement Act in line with international best practice and ensure that governmentâ€™s role is to facilitate, promote, regulate a level and stable economic playing field.

The BUILD document prescribes the promotion of a free press and the repeal of the Access to Information and Protection of Privacy Act (AIPPA) while reviewing the licensing criteria and methodology under the Broadcasting Services Act and related legislation.