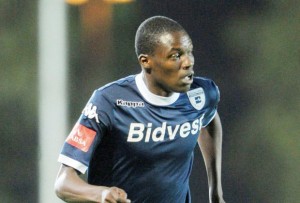 Mukamba recently joined Sonoâ€™s Absa Premiership returnees Jomo Cosmos and Mutasa expressed hope that the man he thrust into the local limelight would prove the real deal for a side that has now become South Africaâ€™s Yo-yo team.
Mutasa expressed belief that the former Dynamos man would change Cosmosâ€™ status as minnows and that Sonoâ€™s track-record of moulding Zimbabwean talent could mean more game time for Mukamba, who has struggled to hit the heights since his move to South Africa in 2013.
â€œCosmos are a club that has successfully developed Zimbabwean players in the past. If you look at Kennedy Nagoli, Benjani Mwaruwari and Mathew Rusike who passed through the club before they went to Europe,â€ said Mutasa.
â€œDenver has taken the same route. I still believe he is a capable player and if he gets the right guidance he can be up there. I am still hopeful because he has got the talent.
If given game time I am sure he can recover his form and go on to achieve great things in his career.â€
Mutasa introduced Mukamba to the premiership with Kiglon back in 2010, and the rangy midfielder immediately caught the eye with his skill, passing range and self-belief.
Mutasa then went on to recruit the then teenager for Dynamos the following year, and in 2012 Mukamba was crowned the best player in the Castle Lager Premiership after orchestrating a successful title campaign for the Harare giants.
A move to Bidvest Wits in 2013 however, marked the beginning of a troubled spell, which has culminated in the move to Cosmos via a seasonâ€™s loan at Pretoria University. Mukamba is yet to feature for his new side as he awaits his work permit.
The 22-year-old playmaker remains one of the key missing pieces as the warriors gather in Harare this week for a crucial 2017 Afcon qualifier against Guinea at the National Sports Stadium on Sunday.