The MDC â€“T Nkulumane constituency MP and deputy organizing secretary, Thamsanga Mahlangu has been admitted at Hillside hospital in Bulawayo where he is undergoing cancer radiation therapy treatment. 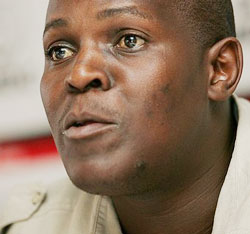 Senior party members close to the former deputy minister of Youth and Indigenization told The Zimbabwean that Mahlangu was admitted at the health centre about four weeks ago after a rare and aggressive form of cancer developed on his right cheek.

â€œThe cancer started as a small pimple on the cheek. The pimple has now developed into cancer. The MP is admitted at Hillside where he is now undergoing chemotherapyâ€ said a senior party official who refused to be named for fear of being accused of intruding into the MPâ€™s privacy.

The official said Mahlangu is responding very well to medication.

â€œHis condition has improved remarkably compared to the time he was admitted. His face was swollen and you could hardly recognize himâ€ added the official.Â  Mahlangu was last year one of the nominees of the Zimrights sponsored outstanding MP of the year.

The MP has initiated numerous developmental projects in his constituency.