Rural households that depended on remittances from urban-based breadwinners are feeling the pinch of recent retrenchments and rising unemployment as food insecurity worsens. 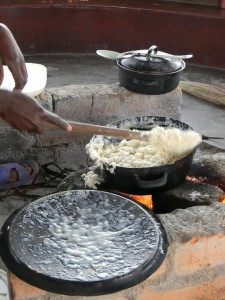 Most rural families have been reduced to one meal a day.

Many households, mostly in the Midlands and southern parts of the country, have suffered poor yields due to drought, lack of inputs and exhausted soils.
An informal survey by The Zimbabwean showed that the retrenchments had adversely affected the rural households of communal and smallholder farmers who were resettled under the land redistribution programme that started in 2000.
The fast-track land seizures removed more than 4,000 white commercial farmers to make way for thousands of blacks, but most of the prime land went to well-heeled individuals who are politically connected.

Two bags of grain
â€œMy son used to send us money for food and other basic commodities whenever he could but that has now stopped. â€œDue to my advanced age, I donâ€™t have any means of generating income to buy food and my dependants are at a real risk of starving,â€ said Munazvo Gore, 60, who is looking after his wife and four grandchildren left behind by two late daughters.
Gore, from rural Mhondoro in Mashonaland West province, only managed to harvest two bags of maize in the 2014-15 farming season. The rains came late and went away too soon, leaving most of his crop to wilt.
The World Food Programme (WFP) says about 1.5 million Zimbabweans need food aid at the peak of the 2015-16 pre-harvest season. The Famine Early Warning Systems Network (FEWS NET) in July said Zimbabwe was burdened with a cereal deficit of 1.1. million metric tonnes.
Goreâ€™s son worked for an engineering company that offloaded most of its workers in July following a Supreme Court ruling that empowered employers to retrench on notice and without any termination of employment costs. More than 20,000 people were dismissed from the time the Supreme Court made the ruling, according to the Zimbabwe Congress of Trade Unions (ZCTU).

Cup of tea
Goreâ€™s family, like most households in the district, are now surviving on one meal a day that mainly comprises sadza and vegetables without oil.Â  â€œWe delay eating until late afternoon when we have sadza. But this is not always the case because at times we donâ€™t have the mealie-meal to prepare the sadza. In that case, we eat anything that we can manage, such as just a cup of tea each,â€ added Gore.
Timothy Munyoro, another villager from Mhondoro who recently travelled to Harare to visit his daughter (whose company has not paid its employees for four months due to financial constraints) said government and donors should urgently step in to provide food aid.
â€œThere is a disaster out there.Â  Our only salvation is food aid, but it seems nothing is being said about it. I hope government and donors will not wait until people start dying before they act. My daughter cannot help anymore because she is not being paid. Other families from my village are in the same situation because those who used to send them money have lost their jobs and thus cannot do anything,â€ he said.
In Zvishavane district in the Midlands, the situation is the same.Â  Communal farmers interviewed by phone said family members were trekking to the nearby Boterekwa escarpment in Shurugwi to illegally mine for gold, while other were trooping into Zvishavane town to vend.

Nothing to do
â€œI was guaranteed of 20kg of maize meal and two litres of cooking oil from my husband who used to work in Gweru – but he has also been retrenched. He is planning to come back and stay at home because there is nothing to do in town anymore,â€ said Beauty Rusengwe, 34, from Mazvihwa in Zvishavane.
The price of grain has shot beyond the reach of many, she added, saying an 18 kg bucket of maize was now selling for $8, up from $5 in February this year.
Economic consultant, John Robertson, said retrenchments would inevitably cause suffering among Zimbabweans in the short term. â€œRetrenchments come with loss of steady income. Rural households that have been depending on breadwinners working in town will naturally feel the pinch and the situation has been worsened by the poor yields in the last farming season,â€ he said.
But the retrenchments were inevitable because most companies were not productive enough and were burdened by excess labour, he explained.