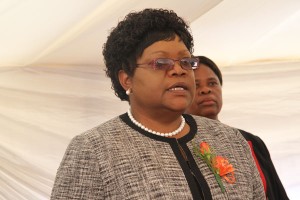 State-sponsored human rights abuses are set to rise as the Zanu (PF) government steps up surveillance of the opposition and internal rebels believed to be on the verge of launching a new party.

President Robert Mugabeâ€™s former deputy, Joice Mujuru, has at last shown a clear sign that she is determined to lead a new political party, together with numerous other heavyweights expelled from Zanu (PF). They have formed a loose political outfit named People First.

Mujuru has crafted a policy document that is seen as providing the basis for the launch of a political party. The document, Blueprint to Unlock Investment and Leverage for Development (BUILD), provides guidelines and ideas on how to transform Zimbabwe into a prosperous democratic nation with a vibrant economy.

People First spokesperson Rugare Gumbo said the BUILD document was a precursor to the formation of a party. â€œIt is an indication of the direction we are taking. We want people to understand what sort of people we are first before launching our party,â€ he told The Zimbabwean.

Sources from within the state security services said Zanu (PF) was increasingly panicking over President Robert Mugabeâ€™s inability to rein in party rebels eyeing his position amid fears that the opposition could resurge and combine to remove the ruling party from power.

For a long time, government has been accused of using state security units to prop up Zanu (PF) up and persecute those supporting the opposition, critical civil society and private citizens perceived to be threats to Mugabeâ€™s rule.

â€œZanu (PF) is panicking because there is so much at stake. The opposition is still considered weak and divided, but there is a thinking that it can regroup and pose a serious threat to the ruling party.

The situation has been made worse by the latest developments in the People First movement where Mujuru seems most likely to transform the establishment into a political party,â€ said a senior CIO operative.

They were also monitoring Zanu (PF) bigwigs reported to be positioning themselves to succeed Mugabe. In addition to the regular officers CIO is using informers and infiltrators who attend civil society meetings and are also members of the opposition.
â€œYou might not see arrests and abductions in the next few months, but if it is discovered that Zanu (PF) is under real threat, the situation will get tense from 2016, possibly the second half of the year,â€ said the source.

A senior officer with the Police Internal Security and Intelligence (PISI), an undercover outfit of the Zimbabwe Republic Police, said Zanu (PF) was afraid that the opposition would take advantage of the worsening economic crisis in Zimbabwe to mobilise voters against the ruling party.

Military intelligence and other units within the army were carrying out parallel surveillance and the shadowy Joint Operations Command was meeting more regularly than in the past, he added.