The tobacco industry is costing the nation its bio-diversity as farmers are clearing huge tracts of natural habitat, an environmental expert said. 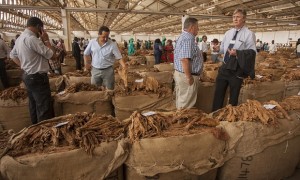 Banarbas Mawire, the director of Environment Africa Zimbabwe, described the destruction as a massive cost to the nation.Â  â€œThe rate at which forests are regenerating is very low and at this rate we will end up losing in terms of biodiversity,â€ Mawire said during a forest Indaba held here recently.
Zimbabweâ€™s thriving tobacco industry is reportedly burning off over half a million cubic metres of fire wood in its curing barns every year, according to Timber Producersâ€™ Federation (TPF).
The Forestry Commission (FC) noted that tobacco production accounted for 20 percent of the countryâ€™s 350 000 hectare loss of forests annually. â€œTobacco is not being grown sustainably,Â  but there will come a time in future that if you donâ€™t have a woodlot you wonâ€™t be allowed to sell your tobacco,â€ saidÂ  FC Deputy General Manager Abednigo Marufu.
TPF former board chairperson, Dr Joseph Kanyekanye, said thatÂ  all local commercial timber producers combined could not meet the fuel demands even if they were to supply all they produced – 600 000 m3 annually.
He said with the tobacco industry now depleting Zimbabweâ€™s natural forests they were hoping to cash in on the lucrative industry by introducing woodlots across the main tobacco growing regions, with the potential of earning them between $8 – 12 million annually.