Tsholotsho FC coach Lizwe Sweswe has hailed the steadying influence of mid- season acquisition Joel Lupahla, as his young side looks to wriggle its way out the relegation grip. 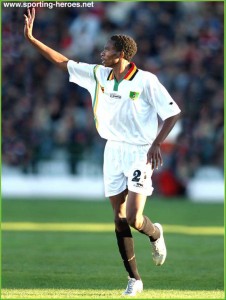 Tsholotsho on Sunday beat How Mine 2-1 for their first home win of the season and Sweswe is aware a few more similarly defiant performances could see them evade the chop. Lupahla had a hand in Tsholotshoâ€™s opening goal and Sweswe expects the speedy former Warriors star to play a pivotal role in the coming weeks.

He said; â€œHe is doing exactly what we brought him in for, that is to guide and inspire the young players. Even if we knew he would not perform as well as he used to do, we were convinced his mere presence among the young players and talking to them would be a source of inspiration.

â€œBut his performances have been good as well, especially considering that he was not playing for any team when we recruited him. Of-course he no-longer has his pace of old but he now uses his brain a lot. But if you donâ€™t know him you might not even realise there is a much older player on the pitch because he is just as energetic as the young players.â€

The Tsholotsho mentor added that there were lots of talented youngsters who would be better placed to play to their potential next season should the team survive. â€œWe have a lot of young talent and definitely they will be a lot more experienced next season and play better. Thatâ€™s one reason we are so desperate to survive because next season would be a lot better for us,â€ he said.