MDC-T president, Morgan Tsvangirai, yesterday came face-to-face with Zimbabweâ€™s poor service delivery when he was forced to address Chitungwiza residents in a gloomy hall with no electricity. 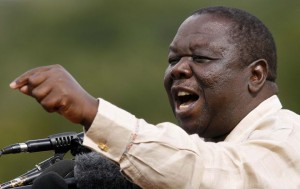 Tsvangirai visited Chitungwizaâ€™s Unit L suburb for a policy dialogue forum which was attended by about 400 residents congregated at the hall which did not have lighting due to power cuts.

Nonetheless, the MDC-T leader proceeded with the meeting amid enthusiastic participation from the congregants who showed impatience with the worsening socio-economic crisis Zimbabwe is going through.

The power utility, ZESA, is failing to provide adequate electricity, with suburbs going for long periods in the dark.

The poor lighting at the hall did not deter Tsvangirai who said Zimbabwe was in a serious crisis whichÂ President Robert Mugabeâ€™s government was failing to solve.

The MDC-T leader described working with Zanu (PF) under the 2009-2013 unity government as unsustainable.

â€œBringing MDC and Zanu (PF) together was like yoking a donkey and an ox,â€ said Tsvangirai.

At the meeting that was also attended by senior party officials, Tsvangirai said MDC-T must craft a strategy and policies in order to solve the crisis in Zimbabwe when it forms the next government after the 2018 general elections.

â€œThey (pensioners) are failing to get their money and this is unacceptable,â€ said Tsvangirai who urged Zimbabweans to speak with one voice.

There have been calls for opposition parties to form a national coalition to unseat Zanu (PF), but no progress has been made so far.

The policy dialogue forum is a nationwide tour where Tsvangirai is meeting with citizens to discuss national issues.