Computer Aid International, in conjunction with UNESCO, has set up a Â£26,000 solar-powered computer laboratory at Madziwa Secondary School in Chipinge. 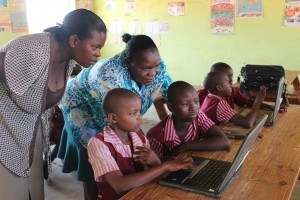 The school has scored a first in the country – bridging the gap between rural dwellers and their urban counterparts.Â  â€œThis is a great achievement as we have managed to teach students in rural schools to operate computers. We started as a small school with an enrolment of less than 150 students in computer studies. But this number has now doubled and we expect that it will continue to increase,â€ said computer teacher Qelani Jiho
â€œThe great thing is that the computer lab can be used on a daily basis as it is a solar-powered system. There is no problem of power cuts because sunlight is always there,â€ she said.

â€œOur staff members have undertaken computer lessons and everyone is now able to use computers. We are now able to print our own examination papers, something which we never dreamt of before. This is ideal for a rural school because our staff members and students are now part of the global technological society,â€ added an elated Jiho.

The acting director of UNESCOâ€™s Associated Schools Project Network (ASPnet), which is running under the Ministry of Primary and Secondary Education, said there was need to install similar solar labs throughout the country. â€œThis is vital if marginalised communities are to embrace ICT,â€ he said.

The UNESCO co-ordinator, Innocent Chademana, said the project had the potential to transform lives in rural areas and urged the government to embrace renewable sources of energy. â€œGovernment has donated computers to various schools around the country, but what boggles the mind is that these computers are lying idle because of lack of electricity,â€ he said. â€œWe urge the corporate world to come on board and fund the establishment of this solar-powered system that is cost effective,â€ he said.

The school, which opened its doors in 2000, was meant to cater for newly resettled farmersâ€™ children who were walking long distances of more than 10km to attend school. The idea of setting up a solar-powered computer laboratory is to bridge the gap between rural dwellers and their urban counterparts.

When The ZimbabweanÂ  visited the school last week it was business as usual with computer studies students winding up their projects ahead of the November examinations.