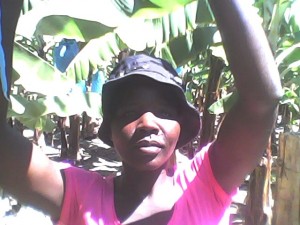 Mildred Gondo – the effects of climate change have been my biggest challenge.

The swiftly shifting landscape in Burma Valley has changed the lives of many women â€“ especially those who are small-scale banana farmers and who depend, almost exclusively, on rainfall for their water supply.

In an interview with The Zimbabwean last week, Amos Dzenga from the Meteorological Department said water ecosystems in the area had shifted and changes in local river systems and waterholes had become a deciding factor – forcing many women farmers to move away from their home areas.

â€œWomen have multi-dimensional roles as mothers and providers and are often heads of households. This naturally means that they are also most often the managers of on-the-ground natural resources,â€ he said.

Key to food security
â€œThis is especially true for women farmers because they rely on nature. At the end of the day they end up holding the key to food security. But climate change has made the risky business of farming all the more difficult for them. More frequent crop failures mean women have to work harder and their families have less to eat,â€ Dzenga added.

â€œClimate change in areas such as Burma Valley threatens to keep poor people, and women in particular, locked in a vicious cycle of poverty,â€ he explained.

As rural family incomes reach some of the lowest levels experienced in living memory, more husbands leave their homes to seek work in urban areas like Mutare, over 60km away. Women and children are left behind.

â€œThis means that women and children are also the first in line to become victims of climate unpredictability. Droughts and flash floods in BurmaValley have become part of the national landscape, causing critical changes to the lives of those most vulnerable,â€ said Dzenga.

Men often absent
â€œSadly, women are at the centre of the climate change challenge because they are disproportionately affected as victims. It is very difficult for grassroots women who find themselves managing families under very strenuous circumstances where traditional livelihoods are under threat and where men are often absent,â€ he said.

The small-scale agribusinesses of growing bananas is being greatly impacted by climate change. Mildred Gondo, a mother of three and small-scale banana farmer, said the impacts of climate changes were her biggest challenge.

â€œDuring a drought it is even worse because we have to walk for long distances to look for precious liquid to water the banana plants. These hardships have really scarred our lives. We hardly have the time to supervise the raising of our children and perform other family duties,â€ said Gondo.

â€œThis has adversely affected banana production because we have to walk longer and further to collect what we need for the bananas to yield,â€ she added.

Dzenga said climate instability, with episodes of extended drought and flash flooding, required women in Burma Valley to adapt to the challenges.Â  â€œWomen have the knowledge and skills to adapt, but they need the power, tools and resources to turn this knowledge into solutions,â€ he said.
Climate change triggers some of the most polarised debates, with some saying that it is all just hot air. But for many rural communities lack of knowledge is a serious impediment.

Traditional leader Kenneth Chigodora, believes that solutions to recurring droughts bedevilling the banana farming in Burma Valley can be determined by spirit mediums.Â  â€œWe can talk of scientific precautions, but the solution to these recurrent droughts cannot be found in science. Our solutions lie with our spirit mediums not scientists,â€ he declared.

â€œWe need to empower these rural communities by making sure they have access to correct information about climate change and strategies to survive it,â€ said Dzenga.