If itâ€™s at all possible, forget about the debilitating 18-hour electricity cuts for a moment. 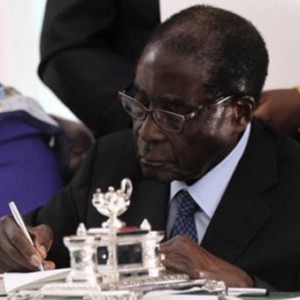 The agonising and costly writing of a new Zimbabwe constitution, accepted overwhelmingly in a 2013 referendum, seems to have been yet another waste of time and money; much of the reformed constitution still has to be adopted into hard and fast law.

The General Laws Amendment Bill seeks to amend 126 Acts of parliament to bring them into line with the constitution but most of the adjustments are woefully inadequate in meeting the new requirements, law experts say.

Three years of drafting and haggling and $40 million later, the constitution was ready in time for the last elections in 2013. At its very core lay improvements to election laws and scores of others guaranteeing democratic rights, basic human rights, freedom of expression and, not least, laws affecting the powers of the executive and the state security apparatus.

Proposed amendments to the crucial Electoral Act now before the Zimbabwe parliament are â€œinadequate and incomplete,â€ reports the admirable group Veritas, an independent Â local think tank on legal matters.

On the existing media laws, Veritas says it is doubtful that they can ever be aligned with the constitution. â€œWhat is certain is that the General Laws Amendment Bill does not even try to do so,â€ says the group. Ideally, laws that make â€œabuse of freedom of expression a criminal offenceâ€ should be repealed and completely redrafted to comply with the new constitution.

The list of flaws in the General Laws Amendment Bill is legion. Since those disputed elections in 2013, no-one in Mr Mugabeâ€™s ruling party, it appears, can either be bothered or find the will to adhere to the nationâ€™s supreme law.

It will be up to the aggrieved to challenge these violations in the Constitutional Court, the highest court in the land. But will the authorities obey rulings of the ConCourt, as it is known?

The ConCourt has just struck down a section in criminal law that allowed prosecutors and police to ignore freedom on bail granted by a court. It has yet to be put to the test. The Constitutional Court has ruled it is no longer an offence to make disparaging remarks in public about Mr Mugabe.

But that went to the wall again the other day when a man was arrested for discussing with friends in a bar the senior moment when 91-year-old Mr Mugabe read the wrong speech in the Harare parliament, one he had delivered there three weeks earlier, an embarrassing episode that had been on everyoneâ€™s lips.