About four years ago, a visitor to Lukona village in Bubi district, Matabeleland North, would have been greeted by a landscape littered with human waste and scraps of toilet paper. 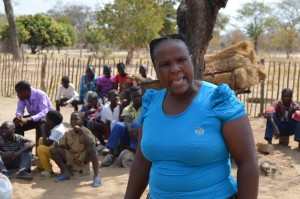 Family members of the 37 homesteads in the area used to relieve themselves in nearbyÂ  bushes and open spaces until HelpAge Zimbabwe came to their aid by assistingÂ  in the construction of decentÂ  ablution facilities under the Water, Sanitation and Hygiene (Wash) programme.

â€œWe had only six households with ablution facilities before HelpAge Zimbabwe helped us to construct Blair toilets at our homesteads.Â  Now, all households in the ward have new toilets,â€ said Nelia Moyo, the local chairperson of the Sanitation Action Group, in an interview with The Zimbabwean.

The wardâ€™s village head, Livion Moyo, said it was by the grace of God that the villagersÂ  had not contractedÂ  diseases related to open defecation all these years. â€œAs a headman, I was feeling embarrassed by what was happening in my area. Men and women wereÂ Â  always clashing in the bushes while relieving themselves. I would like to thank HelpAge for assisting my people to live a decent and civilised life,â€ he said.

HelpAge Zimbabwe provided cement and other building materials for the project while the locals provided labour.Â  The NGOâ€™s programmes manager, Adonis Faifi, said the WASH programme was divided into four thematic areas with one of them being demandâ€“led sanitation.

â€œUnder this programme, we were giving one bag of cement to every household to construct the hole of the toilet. Then they had to find the rest of the materials and build the toilet on their own. We were also teaching the villagers about the importance of having a toilet at home,â€ said Faifi.

Under the programme, HelpAge Zimbabwe also constructed toilets for vulnerable villagers in the district. â€œWe gave vulnerable people all the material to build the toilets, and we would then request the community to assist in the digging of the pits,â€ he explained.

According to Elizabeth Mupfumira, UNICEF communications specialist, almost half of the rural populace in Zimbabwe still practise open defection, raising concerns about disease outbreaks, which are costly to manage.