This world is full of awe-inspiring anecdotes of school dropouts who went on to shake the world with their innovative entrepreneurial ideas and inventions. TAWANDA MAJONI reports on a young Zimbabwean who is on his way up. 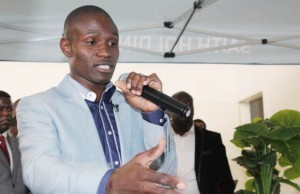 Maxwell Chikumbutso: The school dropout with the world at his feet. (Pic courtesy of Techzim)

Henry Ford dropped out at 16 and later founded Ford Motor Company in 1903, a company that was valued at $199 billion at its peak. Bill Gates went to Harvard University in 1973, dropped out and formed Microsoft with his childhood buddy, Paul Allen, two years later.

Mark Zuckerberg, the founder of Facebook, dropped out of school at a wet 17, while Steve Jobs of Apple dropped out of college at 21 and subsequently recycled cans and bottles for a living before starting his world-famous company.

Zimbabwe has its own genius in the form of Sangulani Maxwell Chikumbutso, who has managed to arrest the attention of the world with his amazing inventions as a Form Two dropout. He has not arrived at the top yet, but has all the ingredients of becoming a future global entrepreneur if competitors do not throw spikes in his lane â€“ chief among these is his dogged refusal to give up!

The dream
Chikumbutso dispels the myth that the departure of a father from the family marks the end of the world. His father, Andrew, an electrician, walked out on the family when he was a small boy, so he grew up with his mother, Susan, in the low-income suburb of Kuwadzana in Harare.

He will be 35 soon, having been born on November 10, 1980 in Mazoe, Mashonaland Central province. Chikumbutso went to Kuwandzana 5 primary school and then Dzibaresekwa High 2 before quitting his studies in his second year, nursing the dream of becoming a motor mechanic one day.

The mechanic job is solidly behind now. He has already made headlines for inventing a green power generator that does not use the usual diesel or petrol and which scientists insist defies the laws of gravity.

In 1999, he made his first mark when he produced a radio broadcaster transmitter.Â  He even used it to broadcast, though illegally, but his project could not take off due to lack of funding. Subsequently, he invented a digital navigation facilitator and the green power generator.

Quick money
Armed with his inventions, he approached some people who assisted with funding to develop his products, but the generator is said to have failed to be patented because scientists insisted it defied the laws of physics.

In a demonstration of his resolve and high principles, Chikumbutso avoided the temptation of quick money when he turned down a buy-out offer from an unnamed European company.

At one time he accepted $500,000 seed funding from an entrepreneur, Teddy de Almeida, an Angolan-born pastor and businessman, which was given as an investment loan, showing the big impact the young man had made.

Almeida is the proprietor of one of the biggest energy companies in Angola trading under the Bongani Group and he made it clear that he did not expect any returns in the green generator project.

The owner of the company Saith Technologies, Chikumbutso has also invented a backpack IP mesh, a vehicle-mount solution, a mini helicopter and a receiver mobile solution. He has exhibited his products in Zimbabwe and demonstrated them abroad.

He has also invented the Digital Navigation Facilitator, which enables easy landing for aircraft and makes use of the size, altitude and speed of the plane. This was despite the fact that he had never been in an aeroplane before!

The inventor took his product to the Air Zimbabwe Technical Training Centre for assessment and it was commended by aircraft engineers. He subsequently presented it to the Air Force of Zimbabwe (AFZ) where the technical team confirmed the productâ€™s viability.

Chikumbutso hoped that the facilitator would add to Zimbabweâ€™s aircraft technology but, unfortunately, there was no financial support to back it.

Inspiration
Chikumbutso is a devout Christian and claims that he got the inspiration to venture into technological invention during a mountain prayer sojourn in 1997. He says he was reading a verse from Isaiah 46 when he got the name Saith Technologies from the line â€œthus saith the Lordâ€.

According to the inventor, he started receiving visions and dreams from that time, saying that was where he learnt about electronics.
He started working on the idea of the green or self-powered generator in 2003. He connected with prominent local engineers, but they told him that it was not possible to produce such a machine as the concept was said to violate existing physical laws.

Undaunted, he took up a job as a truck driver and using the little money he got from it, pursued his dream and by 2009, he had produced a prototype of the green generator, which proved to be working, producing some 1,200 watts.
Again, no-one was interested in his idea and funding would not come.

$1,2 million deal
In 2009, Chikumbutso was invited by the government of Lesotho to do a presentation of his project. He was subsequently offered a $1,2 million deal. He turned it down and later met up with Zach Wazara, former Econet CEO and founder of Brodacom. The two went on to form a partnership that they used to build Brodacom â€“ but it flopped.

During his time at Brodacom, though, Chikumbutso invented what he says is the first WiFi meshing technology in Zimbabwe with self-organising base stations among other projects.Under this partnership, the second green power prototype was developed and generated 50 kilowatts.

Government did not warm up to the concept; neither did patent examiners who suggested that it must be considered as a perpetual motion device rather than a generator.

Max and Clerks, a leading law firm in the UK who handle Motorola and Samsung patent registrations were supposed to come and inspect a bigger prototype, but unfortunately Wazaraâ€™s business began facing challenges and he could not continue funding it.

But even this did not deter him. He proceeded to build three machines that successfully powered his motherâ€™s house in Kuwadzana. There was a ray of hope when, at one time, Johannesburg City Power invited tenders for new and renewable energy solutions.

Chikumbutso was the only individual among the bidders and even though he reportedly performed well, he lost at the end because the awarding director allegedly asked for shares in his company, to which the young genius gave a flat no.