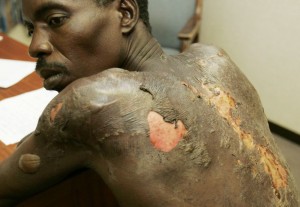 State-sponsored torture was widespread around the 2008 elections.

Among them is Colonel Morgan Mzilikazi, who was one of the original Fifth Brigade officers at the time of Gukurahundi.

Since then he has allegedly been involved in many cases of vicious election violence that has left a trail of bodies and traumatised victims in Buhera. Many victims are distraught that he has been honoured by Mugabe in this fashion.

A local NGO has compiled a dossier of activities attributed to Mzilikazi. Painstaking research among the victims shows that he has been deployed in south eastern Zimbabwe, particularly in Buhera district, on several occasions during election time.
These are some excerpts from the dossier:

Beaten and raped
CT 26 June 2008
CT of Ward 32, Buhera South was MDC-T ward treasurer and a polling agent in the 1999, 2005 and 2008 elections. This is her report: â€œAll my neighbours are Zanu (PF) supporters.Â  They are galled by my support for the MDC and brand me a sell out.Â  In 2008 prior to the run off I was on the run as all polling agents had been threatened with beheading.Â  On 26th June I could not flee with the others as my child had measles.Â  My neighbours, Chinotimba, war veterans including Major Svosve and Mzilikazi were told that I was at home.

They got to my house and broke the door and said “We have got you, Tsvangirai’s whore.Â  You are going to tell us where Morgan is.Â  You whore, who was left by the husband because of your love for the MDC”.Â  They started beating me while in the house.Â  They even beat up my 5-year-old sick child.

â€œThey dragged me out of the house and demanded to know where the other polling agents were.Â  They told me that I had refused to turn back to Zanu (PF).Â  They were going to show me that Zanu (PF) not MDC was ruling the country.Â  They beat me so hard that my buttocks were in tatters.Â  My head still aches even now, my eyesight is poor since then.Â  I cannot see at night.

They took me towards Save river demanding that I show them our hiding place.Â  They beat me all of the 5km along the way.Â  I would collapse and they would carry on.Â  In a bush where I was now naked they said they were going to make me their women.Â  Three of them raped me including Mzilikazi and Svosve.Â  I passed out. I donâ€™t know if the others also raped me after I passed out.

â€œBy 27th June 2008 the Zanu (PF) supporters were moving door to door instructing people to go and vote and declare they could not write.Â  I only got contact with treatment in 2010 when I got tested for HIV and found to be HIV positive.Â  I know I had been negative before because I used to be checked every 3 months.

I have not told my normal health service about this rape.Â  (Client resumes crying).Â  Life is bad.Â  I have refused to sign the anti-sanctions petition and I have been on the run again.Â  Most of the time I stay in the bush.Â  The talk of elections have made things much worse again.Â  I then heard about Doors of Hope and Mary Pamire and she brought me here.â€

HMM 12 June 2008
A group of 20 or more Zanu (PF) youths came to my homestead and took me to the base where I was beaten all over the body and I broke my left arm. I did not receive treatment and had traditional treatment. The back and buttocks were also beaten using big logs by soldiers brought in by Col. Mzilikazi.

JMM 2 July 2008Â Â Â
A group of about 32 Zanu (PF) youths came to my home and threatened to burn it down if I did not come out.Â  I opened the door and they dragged me out.Â  I was tied with a piece of wire hands on the back.Â  I was then assaulted with sticks on the back abdomen and buttocks.Â  After that they forced my wife to give them 1 cock, 2 guinea fowls and took 1 ox.Â  I was then taken to Chiurwi/ Dzapasi Zanu (PF) base.Â  At the base I was to be taken to Colonel Mzilikazi at Muzokomba base camp.

I was escorted by 9 Zanu (PF) youths for 22 kms until we met Col Mzilikazi with some soldiers at Masasa.Â  The colonel then ordered the youths to release me saying what they had done was no longer justified as everyone had voted.Â  The youths returned with me to their base and I was released to go home on 3 July 08.

KM 18 June 2008Â Â Â Â Â Â Â Â Â Â
A group of people I suspected to be Zanu (PF) approached my homestead at around 6pm at my place.Â  They took me outside the house and started beating me up.Â  They used sticks and fists and kicks to beat me.Â  As I was helpless and on the ground they stepped and kicked me.

They stamped on my chest and since then I cannot breathe properly.Â  I have chest pains.Â  The following day they came and burned my garden.Â  They also took some goats and some money: Violators: Makedi / Nhamo Mupondisa / Gideon / Mupondi / Councillor Mzilikazi / Colonel Mzilikazi.

MM 27 May 2008Â Â Â Â Â
I was at home in Buhera, Masasa under Chief Nyashanu when a group of Zanu (PF) supporters came.Â  They included 15 ZNA officers in uniform and armed.Â  The group was led by Col Morgan Mzilikazi.Â  They accused me of supporting MDC. The others were Zanu (PF) youths who were holding wooden sticks. We started fighting for a very short time.

They wanted to abduct me to their base at Morgan Mzilikazi home and I resisted.Â  I was hit by a stone on the head and mouth.Â  I overpowered the people and ran away.Â  I went to hide in a nearby mountain. This incident happened around 0600hrs. I went to stay in Mutare. Violators: Col Morgan Mzilikazi.

WMM 21 June 2008Â Â Â Â Â Â Â Â Â
WMM was forced to get off the bus whilst going home from Mutare and his clothes, money and groceries were taken.Â  He was beaten with wooden sticks at Masasa.Â  The perpetrators were war veterans and Zanu (PF) youths. After that he was taken to Col. Mzilikazi. His hands were both tied with ropes.Â  Gunshots were fired.Â  He cannot remember most details and 3 cattle and 3 sheep were taken and slaughtered on the 24th June 2008.Â  He was then taken to Mutare where he was treated.

WM 12 AugustÂ  2008
I had gone to Chapanduka area to help outÂ  victims who had been hurt. We had intended to transport them to Mutare for treatment. When we go there we met Colonel Mzilikazi with five soldiers. They took us to Muzokomba Zanu (PF) base and sent us to the police station.

I was locked in the cells for 2 days. I told them that I had intentions of buying cattle so they took me to verify, unfortunately the name that I had told them belonged to one of the victims. The lie turned out to be true and they released me. I asked them why they had assaulted me with a rifle butt on the back if I was telling the truth but they did not say a thing.

PM 29 June 2008Â Â Â Â Â Â Â Â Â Â
I had just arrived from Harare when I saw a group of youths.Â  They asked to see me and ordered me to go to the base.Â  I was force marched to the base and forced to surrender all party information.Â  I told them I did not have any and was detained overnight.Â  In the morning they started interrogating me again together with 8 of their youth leaders.

They took my shoe laces and used them to tie my legs and hands and started beating me on the back with thick sticks until I could not feel anything.Â  I did not know what was happening.Â  They took me into a class and ordered me to go to the Command Centre at Bagate where Chinotimba was.

I was taken together with Sibamda and Nyoka who both died from the beatings.Â  I was the only one who survived of the three.Â  I think I got saved after their deaths and told to go home.Â  My right leg is now very painful and I have breathing problems: Violators: Christopher / Mukombe / Nicodimus Mukembe / Israel Charuka / Genius Madamombe / John Mukunga / Chance Sibiya / Col Mzilikazi / Joseph Chinotimba

One of them accused me of having run away and only coming back because elections were near.Â  He told me to lie down and some of the youths searched my bag and took my groceries and money.Â  They assaulted my buttocks and back with huge sticks several times.

After that I was forced to walk 7 – 8 kilometres to the command area.Â  This base was commanded by Col. Mzilikazi (ZNA intelligence commander).Â  I got beaten again by the youths on the buttocks, 5 times, and was then told to go home.Â  I managed to get to the road and slept due to exhaustion and pain. I spent two days in the forest before I got home.Â  I reported the case to ZRP Muti post and they said it is happening all over and there is nothing to be done. Violators: Col Mzilikazi-ZNA.