Monica Tafangenyasha, 51, grew up in rural Mutiusinazita in Buhera District and, against all odds, became a key decision-maker at the helm of the Zimbabwe Womenâ€™s Development Foundation (ZWDF). 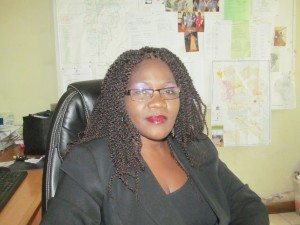 Monica Tafangenyasha – Women are agents of economic and political change.

She urges all women to commit themselves to the process of political and economic change, saying â€œWomen should persevere in bringing about change in our country.Â  Women will languish behind if they are not drawn into a new economic environment and if they don’t change the way they have eked out a living in the past,â€ said Tafangenyasha in a recent interview.

She firmly believes that women need to push government into opening up the economy and creating the necessary enabling environment for investment and business to flourish. Government should also come up with a charter for good governance – â€œThe charter should call for the implementation of growth friendly policies that are gender sensitive.â€

â€œEconomies must not be allowed to remain in isolation. They must be made to progressively integrate into the global economic process. Any good government should highlight the prerequisite of good governance for their country, such as avoidance of wasteful spending and corruption.Â  A good government should also give women positions they deserve in the context of justice, transparency, equity and fairness,â€ she explained.

Still only on paper
Resolutions such as the advancement of women and the setting up of an international research and training institute that were agreed upon by the government through the ministry of Womenâ€™s Affairs, Gender and Community Development long ago were still only on paper and had not actually been implemented, she said.

â€œThe same issues are still being debated, while a host of new issues, problems and concerns have arisen that now all need to be addressed urgently,â€ said Tafangenyasha.

She founded the ZWDF, a charity organisation based in Harare, in 1998. It draws its members from all over the country. The aim of the organisation is to empower and support vulnerable people to achieve a better tomorrow.

â€œI want to improve and enhance the lives of vulnerable women, young people and children. We particularly focus on education and employment, health and personal well-being by providing training, skills nurturing and development through sports and recreational activities,â€ she said.

Discussion
â€œWe want to create a platform for discussions among women and young people of all cultures on issues that affect their welfare,â€ she said.

The foundation organises various social events throughout the year including health and well-being events in partnership with local public health bodies. Events such as multicultural festival, Africa Day and Young Black Achiever’s Awards are held to celebrate the achievements of children and young people.

â€œWe also run workshops and a number of recreational activities to provide skills training for young people to improve their mental and physical well-being,â€ she said. The ZWDF has encountered some challenges over the years. Co-ordinator Rudo Sibiya, advised this reporter that forces aligned to the Zanu (PF) party have stepped up a campaign to intimidate women who are perceived to be MDC-T supporters.

Beaten and harassed
â€œWe have noted with concern that opposition supporters, especially women, are being beaten and harassed before and during elections. Women are being targeted because they constitute the highest numbers on the votersâ€™ roll,â€ said Sibiya.

She added that it had been observed that the police were arresting female human rights activists on trumped up charges: â€œIt is unfortunate that every woman who talks about human rights abuses is arrested,â€ said Sibiya.

ZWDF empowers women through various projects including poultry and pig farming and sewing. â€œWe don’t focus on politics, all we want is to provide women with local and international business opportunities.

We want women to create business synergies and share ideas and experiences as well as exploit other business avenues,â€ said Sibiya.
She said the foundation would continue mobilising and assisting women to start up income-generating projects.