ZIMBABWEâ€™S leading female junior golfer proved why she is widely regarded as one of Africaâ€™s top players in her age group after finishing third in the Optimist International Junior Golf Championship, which was played out on Sunday in Palm Beach Gardens, Florida in the United States. 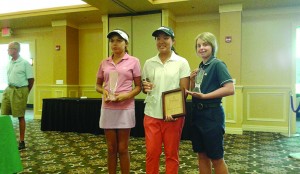 Bekker, who was named Zimbabweâ€™s Female Junior Golfer of the Year for 2015, carded rounds of 80 and 79 at the PGA National Resort and Spa to cap off a solid perfomance in her debut appearance at the prestigious tournament.

Yae Eun Kim, from Dominican Republic, who is ranked number one in the world in the girlsâ€™ 11-13 age group category, successfully defended her title after shooting identical rounds of 71 over the two rounds.

Playing a three-ball against the two best players in the world in the final round, Bekker started well as she managed to birdies against three bogeys on the front nine before she was slightly derailed by four bogeys and a double bogey on the back nine.

Bekker has been enjoying a successful year, which saw her representing the senior national ladies golf team in the Regional All Africa Challenge Golf Trophy held in Namibia five months ago and the Gilberson and Page Trophy Tournament which Zimbabwe hosted in August.

She returned a month later to win the Lion of Africa Junior Africa Challenge played at Zebula Golf Estate and Spa in Polokwane, South Africa, from September 1 to 3.

The opportunity to play at the Optimist International Junior Golf Championship should help develop her game, as she had the opportunity to compete against the worldâ€™s top players in her age group.

The Optimist International Junior Golf Championship is one of the most prestigious junior tournaments in the world, attracting over 600 junior golfers from ages of 11 to 18.