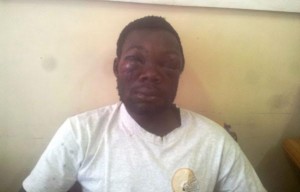 Walter Munyarari (25) confirmed to The Zimbabwean on Tuesday that he was shot in the face by security guards when he was caught
panning the diamonds illegally.

He is set to have Â surgery to remove two bullets on his face.
â€œI had gone to pan for the diamondsÂ illegally and I was shot by the security guards on my face twice. IÂ managed to run away and went home. I am here now to seek medicationÂ and I am in great pain.â€

â€œI have no regrets for my actions because I cannot access
employment in Zimbabwe and I did this out of desperation. I needed
financial support for my mother, wife and two children,” said Munyarari in an interview with The Zimbabwean.
He also alleged that laxity in security in the diamond fields is also
contributing to the increase in panners taking their chances.

â€œWe have become a reliable source of income for security guards and
mining officials who demand money from us to pan in the red zones.
Mine workers especially at Mbada Diamonds work for nothing and on average 40 panners per day pay their security guards to access the mining fields. The only problem comes when you are caught by the reaction team on patrol like in my case,â€ said Munyarari.

Manicaland Police Spokesperson Luxson Chananda said he could not
provide a comment as he continuously said he would look into the
matter and later make comment.

Further efforts to get a comment from Chananda proved fruitless as he said he would make a comment later.

Meanwhile, the Centre For Research and Development (CRD) has said the biting economic hardships have seen an increase in the number of panners illegally entering the diamond fields of Marange to pan for diamonds.

The Acting Director of CRD JamesMupfumi told The Zimbabweanyesterday that the situation has been exacerbated by government’s failure to expeditiously institute reforms in the diamond sector in order to force mining companies to account for their mining practices.

â€œThe security situation in Marange has deteriorated. The CRD is on
record for calling upon government to halt mining operations in the
diamond fields in order to allow due diligence processes. The
government has not considered such options in spite of admitting to
loss of revenue and human rights violations of communities by these
companies,â€ he said.