Open Polytechnic Bachelor of Arts graduate Driden Kanuka is set to send over 40,000 books to underprivileged schools in his home country, Zimbabwe. 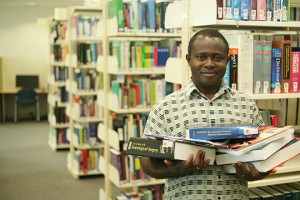 â€œOn November 6 we had a function in Hamilton to announce the first lot of New Zealand Goodwill Ambassadors of the Zimbabwe Rural Schools Library Trust,â€ Driden explains.

The Trust took its campaign to Auckland on Saturday October 10 with the official launch of the trustâ€™s Auckland Operations by the Ethnic Affairs Team Leader responsible for Stakeholder Capability, Anukool Sathu, in the Jubilee Hall at the Parnell Community Centre.

For the former Open Polytechnic student, who graduated this year with majors in communication and library and information studies from the distance learning specialist, the fundraising efforts to send the books across the globe are helping him realise a lifelong dream.

â€œAs a young child attending Nyamasanga Primary School in Chitomborwizi rural area in Zimbabwe, I used to visualise myself driving a truck full of books past the school assembly. I didn’t know about libraries then,â€ he explains.

â€œDuring the course of my studies with the Open Polytechnic, after I moved to New Zealand, I managed toÂ juxtaposeÂ the differences in the provision of library services for children in New Zealand and those in Zimbabwe and concluded that something had to be done to help to improve access to information for children in less developed countries,â€ explains Driden.

A Zimbabwean colleague who lived in Auckland asked Driden for advice on what he could do for the primary school he went to in Zimbabwe.

â€œI told him if he had money to ship books to Zimbabwe I could get some books for him. He gave meÂ the go ahead to look for books, andÂ I gotÂ nearly a thousand books which he shipped to Zimbabwe and were delivered to the school,â€ Driden says.

The books made a huge impact, the head of the school said that academic results improved at the school afterÂ the books were received and used.

â€œI then thought we could start a programme that mobilised resources for a few more schools; this led to the establishment of the Zimbabwe Rural Schools Library Trust, whichÂ has been registered as a charitable trust in Zimbabwe and in New Zealand.Â The trustÂ intends to develop a model for library development for rural schools in developing countries.â€

Driden hopes that once the model is established in Zimbabwe, he would be able to replicate similar projects in other countries where there is a similar need.

â€œWe have a full container, with about 40,000 books already, but we are looking for more donations of books to fill the container,â€ he explains.

Ranging from primary school reading aides to high school literature, Driden says they are hoping to continue fundraising to cover the costs of distributing the books once they arrive in Zimbabweâ€™s capital, Harare.

Driden thanks the friends approached to form the trust, all of whom are equally passionate about helping children in need of reading material, supporters of the project who have volunteered services and resources towards the campaign, and organisations that have provided financial support and opportunities to fundraise, who include the New Zealand AIDS Foundation African Communities Programme, and Hamilton based businesses such as Pak N Save Clarence Street, Countdown Te Rapa, Mitre 10 Mega at The Base, Bunnings Te Rapa and The Warehouse Hamilton who provided facilities for sausage sizzles as well as The Millennium Insurance Group Limited who sponsored the production of promotional material and SBS Bank who supported the fundraising fun run/walk.

â€œWithout this kind of support, it could have been mission impossible,â€ explains Driden.