A huge manhunt is under way for surviving members and accomplices of the Islamist group that killed 129 people in Paris on Friday night. 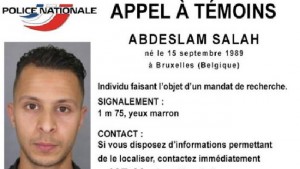 Police have named Brussels-born Salah Abdeslam, 26, as a key suspect. He was reportedly stopped by officers in the wake of the attacks â€“ but then let go.

Meanwhile, French aircraft have attacked the Syrian stronghold of IS.

Latest reports from France say police investigating the assaults have carried out a raid in a Paris suburb, Bobigny.

French media organisations say major police operations have also taken place in Jeumont, close to the French border with Belgium, and in the southern city of Grenoble â€“ but it is unclear if they are linked to the Paris attacks.

The Islamic State group has said it was behind Fridayâ€™s gun and bomb attacks on Parisian bars and restaurants, a concert hall and the Stade de France, the countryâ€™s main sports stadium.

Seven attackers died in the assault on the French capital, most of them after detonating suicide belts.

Salah Abdeslam, the man named by police as a key suspect, is said to have rented a VW Polo car that was found near the Bataclan concert hall, where 89 people died, and believed to have been used by attackers.

On Saturday he was in a vehicle with two other men near the Belgian border when it was stopped by police, officials said, but was released after checks.

It is unclear whether the French authorities had matched the VW Polo found at the Bataclan venue to him at the time he was stopped.

Police have described Salah Abdeslam as dangerous, and warned people not to approach him.

French news channel BFMTV quoted an investigation source as saying that he and one of the other attackers were known to the Belgian authorities.

He is one of three Belgium-based brothers linked to Fridayâ€™s attacks, officials say.

Another, Brahim Abdeslam, 31, is said to have been an attacker who blew himself up outside a bar on the Boulevard Voltaire near the Bataclan, wounding one person.

A third brother, Mohammed, was reportedly arrested in the Brussels neighbourhood of Molenbeek while returning from Paris and remains in custody. Belgian police say they have made a total of seven arrests.

Officials said the brothers were traced following the discovery of two rental cars registered in Belgium â€“ the VW Polo rented by Salah Abdeslam, and a Seat containing Kalashnikov automatic rifles that was found abandoned in the Paris suburb of Montreuil.

One of three attackers who died at the Stade de France after detonating suicide belts has been named in media reports as Bilal Hadfi, aged about 20. He also lived in Belgium and was known to the Belgian authorities, BFMTV reported.

Belgiumâ€™s Premier Charles Michel said the Belgian authorities would crack down on Molenbeek, which has a reputation as being a haven for jihadists.

â€œI have noticed there is almost always a link to Molenbeek, that there is a gigantic problem there,â€ he said.

Another attacker to have been identified is 29-year-old Frenchman Omar Ismail Mostefai, who blew himself up at the Bataclan.

He had a criminal record and had been flagged up by French intelligence as a possible Islamist extremist who may have spent time in Syria. Reports in France say that his radicalisation file was renewed in October, but that this would not have meant he was automatically placed under surveillance.

The authorities are also looking into the provenance of a Syrian passport found at the site of the Stade de France suicide bombing in the name of a man who arrived as a refugee in Greece before claiming asylum in Serbia.

French investigators are pursuing an international trail that stretches across Europe â€“ and one concern for security services in other countries is how far Islamic State has already put in place the ability to replicate the Paris attacks.

There are unconfirmed reports that a similar style attack might have been planned in Turkey for the same time but was foiled.

Tracing back the Paris operatives to whoever organised them will be crucial in order to understand what else might be planned.

These attackers do not appear to have been people simply inspired by IS, but rather trained operatives.

And the fact that Western intelligence services do not appear to have picked up any signs of this plot from their human and electronic sources will only increase concerns.

French President Francois Hollande has said the attacks were an act of war and promised that his countryâ€™s reaction would be pitiless.

On Sunday, 10 fighter jets operating out of French bases in Jordan and the UAE dropped 20 guided bombs on four targets in Raqqa, the French defence ministry said.

The targets included a command centre, recruitment centre for jihadists, a munitions depot and a training camp for fighters, the ministry said.

The strikes were carried out in co-ordination with US forces.

France is currently marking a third and final day of national mourning. A state of emergency declared by President Hollande remains in force, and thousands of extra police and troops are on the streets of Paris.

There have been several security alerts and scenes of panic in Paris over the weekend, where people remain jittery following Fridayâ€™s bloodshed.