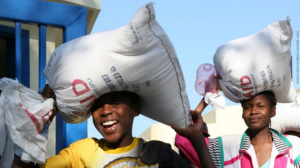 To improve household food security and nutrition in Matabeleland North and South, the Amalima activity is helping communities improve access to and availability of food, community resilience to shocks, and nutrition and health among mothers and children in Tsholotsho, Gwanda, Mangwe, and Bulilima.Â  This year alone, USAID distributed 800 metric tons of supplementary food to more than 45,000 mothers and children, through 58 rural clinics and 24 distribution points in the two provinces.Â  The distributions address chronic malnutrition during the first 1,000 days of life, which is a critical period for preventing stunting and physical and mental disabilities associated with malnutrition.

Amalima, the word for the Ndebele custom by which communities come together to help each other engage in activities such as land cultivation, livestock tending, and asset building (Nhimbe in Shona), applies a set of innovate approaches that build on existing communal initiatives.Â  A consortium of NGOs led by Cultivating New Frontiers in Agriculture, including Organization of Rural Associations for Progress (ORAP), Dabane Water Works, International Medical Corps, the Manoff Group, and Africare, implement Amalima.

In response to the past yearâ€™s low rainfall and resulting poor harvests, Amalima is providing additional food for the lean season, including sorghum, vegetable oil, beans, and peas, to households with mothers and children, ensuring that mothers and children receive adequate food.

Earlier this year, Amalima also launched the Household Asset Voucher activity, through which 1,000 households received a voucher exchangeable for commodities or services such as small livestock, irrigation or farming implements, small grain seeds, and fertilizer for use in the upcoming farming season.Â  The project also expanded the Cash for Assets activities during its second year. Under Cash for Assets activities, vulnerable households receive cash in exchange for labor to produce shared community assets.Â  Over the past year more than 30 assets, including dip tanks, grazing land, irrigation schemes and dams, have been constructed or rehabilitated by communities with USAID support.

USAID/Zimbabwe Mission Director Stephanie Funk praised Amalimaâ€™s work, saying, â€œThrough the great work of Amalima and its partnerships with local communities, we work together to ensure that families maintain adequate nutrition for mothers and young children, with the knowledge that cognitive development lost early in a child’s life due to malnutrition cannot be regained later.Â  At the same time, we build long-term community resilience by helping these households diversify their income streams and reduce their vulnerability to hazards such as drought.â€

Amalimaâ€™s Chief of Party, David Brigham commented, â€œAmalimaâ€™s targeted districts were hit hard by failed rains, and the current lean season will be difficult.Â  But the combined efforts of community members, the Amalima team, and local stakeholders have built resilience, community solidarity, and household capacity.Â  Iâ€™m proud of what we have accomplished so far and what we will build together in the coming years.â€