Attempts to disrupt the Vigil as we embark on our 14th year are linked we believe to a growing Zanu PF mafia in the UK. 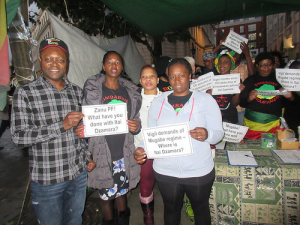 It is clear that some Zimbabweans who have settled here are unrepentant Mugabe supporters who are in Britain only because they have destroyed Zimbabwe and seek new fields to loot.

While the Vigil is busy challenging a a British GP who is trying to take over a farm in Zimbabwe weourselves are under siege from a determined group who are seeking to profitfrom the asylum industry. They are trying to hijack our brand for their ownpurposes and have ready allies in deceitful online outfits such as Zimeye.com.

At a meeting of the Zimbabwe Action Forum (ZAF) after the Vigil we discussed the problem of dodgy legal representatives feeding off vulnerable asylum seekers. One person who callshimself â€˜Dr Masimba Mavazaâ€™ was mentioned by several people. Elementary checks on the man described by Zimeye as â€˜one of the UKâ€™s best immigration lawyersâ€™ revealed the following: 19 January 2011 STATEMENT FROM THE OFFICE FOR JUDICIAL COMPLAINTS â€“ â€˜MR MASIMBA MAVAZA A spokesperson for the Office for Judicial Complaints said: â€œMr Masimba Mavaza, a magistrate appointed to the Corby Bench, failed to inform the Advisory Committee of his arrest for fraud by false representation. A conduct investigation by the local Advisory Committee found that Mr Mavaza had not demonstrated the qualities of good character and sound judgment and recommended that he should be removed from the magistracy. As a result, the Lord Chancellor and the Lord Chief Justice have removed Mr Mavaza from the magistracy.â€™ (http://judicialconduct.judiciary.gov.uk/documents/Magistrate_Mr_Masimba_Mavaza_-_OJC_Investigation_Statement_0111.pdf).

The Vigil is not an asylum organisation but it advises supporters pursuing asylum cases to use only legal advisors recommended by our friends, the Zimbabwe Association, a registered charity which has long experience in this field. For their contact details see â€˜Refugee Informationâ€™ in the left hand menu on the front page of our website.

Talking about legal affairs, we notice that the wife of Nottingham GP Dr Sylvester Nyatsuro is happy to splash out money on lawyers in an attempt to muzzle the media about Dr Nyatsuroâ€™s attempt to take over a farm in Zimbabwe which was bought in the 1980s by a Zimbabwean citizen Philip Rankin. We notice that a report on thesiege of the farm by Mrs Nyatsuro and her thugs has been dropped from the website of the British Daily Telegraph. However the article is available on our website, see: http://www.zimvigil.co.uk/vigil-news/campaign-news/732-british-doctor-with-links-to-robert-mugabe-seizes-white-farm–oct-14-2015. The British Times newspaper also published the story. It still appears on theirwebsite but with the disclaimer: â€˜This article is the subject of a legal complaint from Mrs Veronica Nyatsuroâ€™.

Despite the Nyatsurosâ€™ legal threats, which many of our supporters have experienced, we would like to let them know that we will be outside their clinic again on Friday 13th November to inform Dr Nyatsuroâ€™s patents of his appalling greed as a British citizen in seeking to dispossess a Zimbabwean citizen of his legally bought farm when the GP has no apparent intention himself of going there to work the land.