Today marks the 23rd anniversary of the International Day of Persons with Disabilities (IDPD). According to the United Nations website the day works to promote action to raise awareness about disability and draw attention to the benefits of an inclusive and accessible society for all. 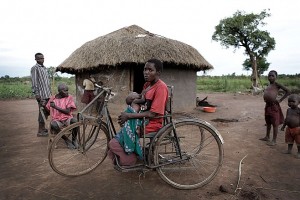 The day comes barely a week after gender activists, government and the media, and ordinary citizens on 25 November observed the start of the Sixteen Days of Activism by wearing and colouring iconic monuments orange in support of the United Nations Secretary General â€œUNiTE to End Violence Against Womenâ€ campaign.

The campaign uses the colour orange to symbolise a bright and optimistic future free from violence against women and girls.
Through the Sixteen Days of Activism the world has marvelled at the magnificence of the Niagara Falls, Gate of India, the Pyramids and the Empire State building draped in orange to raise awareness against Gender based violence (GBV). One is yet to see the significance of these noble gestures in the lives of disabled women and girls in villages across Southern Africa.
This yearâ€™s IDPD theme, â€œInclusion matters: access and empowerment for people of all abilitiesâ€ is a call for governments and civil society to work together with organisations of persons with disabilities to have an inclusive Sixteen Days of Activism campaign.

This past weekend I joined a march against GBV in Orange farm, a township in the outskirts of Johannesburg, organised by Let Us Grow, a local community based organisation established in 2006 by Rose Thamae, a gender and HIV and AIDS activist.
The organisation offers social support for people living with HIV and AIDS. The march aimed to raise awareness on GBV after the community in recent months experienced increased rates of gang rapes.

A sizeable crowd comprising young and old women and men heeded the call. They came out with their vuvuzelas, whistles and lots of energy to reclaim their community. We all carriedÂ  placards with messages condemning GBV such as, â€˜My body is not a war zoneâ€™ as well as messages of hope like mine which read;â€˜365 Days of peaceâ€™. The marchers handed over a memorandum from the community members to the Station Commissioner at Orange farm police station.

While a few disabled girls and women joined, even this march lacked messaging over their plight. There is limited material that is disability friendly. While TV broadcasting now provides sign language for news, this is just a tiny fraction of what is needed.
Disability, like gender, is a social construct, as much rooted in cultural, social, political, legal and economic factors as it is in biology. A recognised definition of disability refers to those with physical, sensory, emotional, intellectual, learning, health or other disabilities that may be visible or invisible, stable or progressive, occurring at birth or later. Given the diversity of definitions, there are no clear statistics on the number or percentage of people with disabilities.

However, it is generally estimated that at least 15% of the worldâ€™s population lives with a disability, roughly equal proportions of boys, girls, men and women. The majority of people with disabilities live in developing countries and are among the worldâ€™s most vulnerable and least empowered groups.

All too often they experience stigma and discrimination with limited access to health care, education and livelihood opportunities despite increased needs for services and support. Women and girls with disability in developing countries experience the triple burden of discrimination arising from gender, poverty and disability.

Article 6 of the Convention on the Rights of Persons with Disabilities requires states parties recognise that women and girls with disabilities are subject to multiple discrimination. They are required to take measures to ensure the full and equal enjoyment by them of all human rights and fundamental freedoms.

Yet according to the United Nations, over half of women with disabilities have been victims of physical abuse at some point in their lives, a higher rate than the estimated prevalence among women without disabilities.

A background paper for an Informal Session on Women with Disabilities presented at the Session of the Conference of States Parties to the Convention, on the Rights of Persons with Disabilities in 2012 noted that: â€œfor far too long, women and girls with disabilities have been invisible, both to the advocates of womenâ€™s rights and of disability rights, and this has increased their vulnerability. Women and girls with disabilities (W&GWD) are likely to experience the â€œdouble discrimination,â€ both gender based violence, abuse and marginalisation.

A paper submitted to the Committee on the Rights of Persons with Disabilities by the Centre for Disability, Law and Policy at the University of the Western Cape in 2013 recommended that disability be comprehensively and meaningfully integrated into all aspects of governmentâ€™s response to gender based violence. As we move into the Post 2015 era, with its mantra, â€œleave no one behindâ€, its time to heed that call. – Lucia MakamureÂ

(Lucia Makamure is the Alliance and Partnerships Senior Programme Officer at Gender Links. This article is written in her personal capacity as part of a special series for the Sixteen Days of Activism being produced by the Gender Links New Service)