Recently appointed Minister of Environment, Water and Climate, Oppah Muchinguri, has approved developments on Borrowdale wetland despite strong opposition to the controversial scheme. 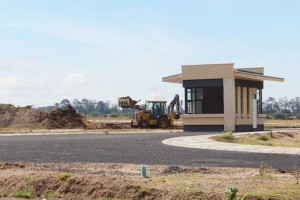 The Environmental Impact Assessment (EIA) for Augur Investmentsâ€™ Millenium Park project was certified on 16 October. This flies in the face of years of prolonged work and activism by residents, conservationists, and to some extent the fraught Environmental Management Agency (EMA). The new certificate is issued to Mike Van Blerk who represents international property giants Augur Investments on the ground in Zimbabwe.

Minister Muchinguri stipulated in the certificate that to reduce the environmental impact of the development, the developers must fence off from construction 68 hectares in the middle of the wetland, and that they are forbidden from drilling boreholes, now, and in the future.

Councillor for Borrowdale, Rusty Markham is unconvinced. â€œThe minister and the developers are insincere about this. Borrowdale barely receives any municipal water at all, so how do they intend to run such a vast complex of shops and houses?â€

Conservation Society of Monavale (COSMO) director, Dorothy Wakeling said that setting aside the allotted 68 hectares was pointless. â€œDeveloping around this tiny core will kill the wetland. The whole vlei is a wetland and should not be touched.â€

Muchinguriâ€™s decision reverses former minister Saviour Kasukuwereâ€™s order to halt construction until several legal and procedural problems with the project were addressed. The new minister was appointed in July of this year.

When the first EIA was conducted, residents were furious as it was inexplicably carried out in two parts rather than as a realistic and holistic single assessment. Also, the documents by law should be public but were kept under lock and key. Stakeholder engagement was sorely lacking throughout the process. When members of the public did finally gain access to the studies, they were written off as biased and inaccurate.

According to water expert Professor Chris Magadza, by law gazetted wetlands should not be developed, and thus EIAs never conducted. â€œThe Environmental Act is the highest in the land and supersedes all other laws,â€ he said.

The developers have leant on the executive powers of the minister over the Act to manoeuvre their project into place.

Now, residentsâ€™ groups and environmental NGOs are banding together with one objective in mind â€“ that is the complete halting of development on all wetlands in Harare, by order of the courts.

Speaking to Harare News, Councillor Markham said, â€œIt is now time for a class action to protect Harareâ€™s wetlands. It is quite obvious that these are being developed willy-nilly, and the law is being circumvented.â€

Markham says that the council-owned Gunhill vlei was sold to the developer at $3 per square meter. The land is now valued at $65 per meter, even undeveloped. â€œNobody in council is being held to account for this,â€ protested Markham at a recent gathering of key stakeholders from different areas with wetlands under threat. There is a feeling among them that acting as a unit will be cost effective and carry more weight.

Other vleis currently under immense pressure include Ashbrittle, Highlands (Gunhill), and Borrowdale â€“ which are all under construction. Harareâ€™s flagship wetland â€“ Monavale â€“ is also threatened, though approval for 160 cluster homes has not yet been given. There are fears that the Patel family who own land and have applied to develop the a section of the site, lacking capital outlay for such a huge project, will simply sell it off â€“ approval included â€“ to a bigger developer such as Augur.

NGOs including Birdlife Zimbabwe and COSMO, have already united with the Borrowdale Ratepayers Association to get the ball rolling. Other likely participants will include Councillor Charity Bango of Marlborough who is standing to defend the Ashbrittle Wetland from destruction, and the Highlands Ratepayers Association.

Legal action in 2016 will target not just the developers, but the various authorities who stand accused of neglecting their mandates â€“ EMA, the Minister of Environment, and the City of Harare too.

Although Van Blerk was reachable on his phone, response to emailed questions was not forthcoming at the time of going to press.

By 2050, global demand for water is expected to increase by 55% as the worldâ€™s population rises to 9 billion. Wetlands have a critical role to play in water purification and storage, as well as acting as biodiversity safehavens and urban carbon sinks which help to combat climate change. Local experts agree that the role of wetlands in Harare is more important than ever as water becomes scarce.