As over 1.5 million people - over 16% of the population - in Zimbabwe face food insecurity this year, which is an increase of 164% compared to the previous season, one can not help but wonder if this is solely as a result of drought or there are other factors involved. 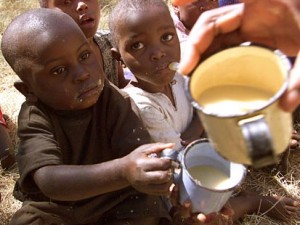 Statistics released by the World Food Programme (WFP) on the situation in Zimbabwe are nothing short of disturbing, as 28% of children under the age of five years are said to be stunted – have heights too low for their age because of malnutrition.

It is also reported that 56% of all children between the ages of six and 59 months suffer from anaemia, whilst less than 17.3% of Zimbabwe children between six and 23 months receive recommended minimum acceptable diet for adequate nutrition.

So what could be the root cause of all this?

There are so many factors involved in a nation becoming food deficient, but in Zimbabwe, the main reasons are the very disastrous economic and political policies by the President Robert Mugabe-led ZANU PF government since 1980.

Zimbabweans have over the course of history been made to believe that the armed liberation struggle of the 1960s and 70s was primary about Black majority rule and land.

During colonialism, the vast majority of arable land was confined to a very few White people, whilst the majority of Black people were crammed into small arid unproductive areas.

The liberation struggle was meant to resolve such ‘colonial imbalances’, but what was the result?

At the Lancaster House conference of 1979, the ZANU PF party agreed to a compromise that defied all logic.

Why after the loss of thousands of innocent men, women, and children in a war that put land at the core of the struggle, and then at end of it all compromise to have the land reclaimed after 10 years?

And even after the 10 years, the ZANU PF government never seemed at all serious about addressing these ‘historical imbalances’, as they played footsie on the land issue.

What was going on?

This week I had the good fortune of communicating with two renowned former cabinet ministers who served in the first government of the newly independent Zimbabwe, and were veterans of the struggle for the country.

One of these former ministers expressed his gravest disappointment with how everything fell apart at the Lancaster House conference, as that is when he realised the true intentions of his leaders.

He said that it was then that he realised that the so-called liberation struggle was never about the land or the people, but about
individual power.

The leaders wanted to obtain power immediately, but the majority of the landless and economically disadvantaged majority could wait for another 10 years.

The ex-minister was close to tears as he expressed his regret at being part of the betrayal of the people of Zimbabwe – whilst the other ex-minister concurred, saying the manner in which ZANU PF ruled the country since 1980 was not what they fought for.

They proved to have been correct in their assertions, as the ZANU PF government ended up not waiting for 10 years to take the land issue seriously, but 20 years – leading to a panicky, impromptu, disastrous, and poorly planned land redistribution programme.

The way in which this land redistribution programme was so poorly carried out clearly showed that the ZANU PF government had not planned to redistribute land even in 2000 – and had no intention of doing so in the foreseeable future.

The only reason it embarked on that ill-planned disastrous programme was that the party’s leaders’ own grip on power was seriously under threat from the newly-formed Movement for Democratic Change (MDC), and they had to come up with something to save themselves with.

(The same applies to another panicky and ill-planned scheme, the war victims compensation and the Â pensions given to war veterans, as these people who bore the brunt of the liberation struggle had also been dumped and forgotten until they demonstrated in the mid-1990s.

Only then were they remembered – 15 years after independence.)

The lack of regard concerning the serious issue of the land and agriculture by the ZANU PF government is primarily why there is such food insecurity in Zimbabwe.

Had the government been serious about balancing the issues of redressing colonial imbalances and ensuring food security for the country, the 10 years that they had agreed to compromise on the land question at the Lancaster House conference would have been more than adequate to prepare the new farmers.

They could have used that time to identify and train those Black people who had the passion and capabilities to be great farmers.

There was time to work with interested commercial farmers who would train those identified Black potential farmers in the proper management of farms.

10 years would have been more than enough to properly identify underutilised arable land and earmark it for acquisition.

Similarly, 10 years would have been adequate in providing appropriate notices to any other farmers of the government’s intention in acquiring the farm, and thereby, putting in place measures that would have ensured a smooth and well-planned transfer.

The fact that all this was not done, clearly showed that the ZANU PF government was not planning at all to redistribute land.

Had it not been for the formation of the MDC, even today there would still had been no redistribution of land.

As such, the haphazard manner in which government carried out the redistribution programme – whereby untrained people were given previously productive commercial agricultural land to experiment with – is the main reason there is so much food insecurity in this country.

The other reason for the current food insecurity is the fact that the government never bothered with building any infrastructure that would cater for the eventuality of drought periods like this season.

No significant – if any – dams were built in most if those agricultural areas.

Most farmers still heavily rely on rain-fed agriculture, something that is tragically myopic in this age of global warming.

There has seldom been any season whereby there was a complete lack of significant total rainfall in this country, such that, had dams been constructed, there would have been enough water for irrigation.

Similarly, other policies, such as land tenure, that would have enabled farmers to borrow money from banks were not put in place, as such these farmers continually had to beg for inputs from the government – something clearly unsustainable.

Although most southern African counties are being adversely affected by this season’s El Nino-induced drought, there is no doubt that Zimbabwe is being affected more mainly due to these poor government policies – which has so callously turned a once prosperous bread basket of Africa into a basket case of Africa.

Zimbabwe is endowed with so much resources, minerals being some of the most outstanding – however plundering and poor policies have led to the majority of people not benefiting at all from these resources – only benefitting the powerful.

The government’s half-hearted and confused economic policies have also led to the majority of people in Zimbabwe living in abject poverty – with at least 76% of rural households, and 38% of urban dwellers, surviving on less than US$1.25 per day.

If the government had sincerely embarked on sound policies that seriously economically empowered the people, the effects of drought would hardly have been felt, as people would have been able to import their own food.

That is how people in arid/desert countries, like Qatar, Saudi Arabia, UAE, etc survive – we do not hear them crying about drought every year.

As such, the ZANU PF Â government needs to seriously look itself in the mirror and question its sincerity in serving the interests of the people of Zimbabwe.

If a government is so cruel towards its own people to such an extent of not caring whether they live or die, that is cause for extreme concern.

All politicians love power, but most, at least, take good care of their people, but ZANU PF’s love for power with utter contempt for the people is sickening to say the least – and it is time that the people also started questioning their allegiances.