REMNANT CHUCRHâ€™s Pastor Patrick Mugadza says President Robert Mugabe and his government are being used by the devil to clamp down on dissenting voices. 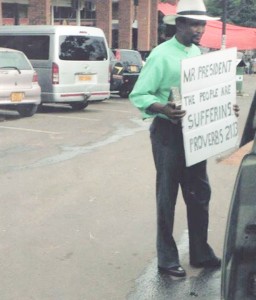 The devil is at work … Pastor Patrick Mugadza

Mugadza came to prominence after he was arrested for demonstrating against President Robert Mugabe at the annual Zanu PF party conference which was held in Victoria FallsÂ last December.

He spent the Christmas holidays in detention and came out defiant, saying it was high time Zimbabweans started demanding the safe return of missing journalist Itai Dzamara.

On Wednesday, Mugadza visited the Dzamara family in Glen View and prayed for them before touring the barbershop from where the activist was abducted. Dzamara was abducted by state security agents in March last year after he had held a series of peaceful protests against Mugabeâ€™s â€œmisruleâ€.

â€œIt is not a mermaid which took him, because he was nowhere near a river, neither was he mentally ill to the extent that we might believe that he just went into the forest,â€ he said.

â€œHe was taken by someone to wherever he is and we are saying the state should value human life.â€

Speaking to Journalists at the barbershop, Pastor Mugadza said Mugabe was being â€œusedâ€ by the â€œdevilâ€.

â€œFor example, you may have a hammer and a nail; they can stay together very well inside a tools box but the moment a carpenter comes inÂ then there is war between the hammer and the nail and this is the reason we should pray for the nation.â€

In his prayer, Pastor Magadza said for Zimbabwe to move forward there should have an interim government which will restore the lost glory.

â€œThat government (interim) Lord will unite us and restore peace and bring us together because we are so divided,â€ he prayed.