It has been reported that preparations for a birthday bash for the president of Zimbabwe are underway. The ruling ZANU PF is reportedly planning to splash $800 000.00 on the oldman's 92nd birthday. 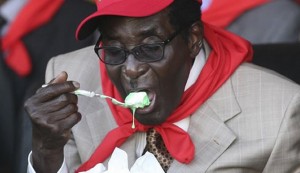 It is reported that president Robert Mugabe’s banquet will be held in the drought stricken Masvingo province next month. This rumour makes me to fume with anger as people in the country are facing food shortages due to drought while ZANU PFÂ Â  is planning all mostÂ  1 million dollars on a party.

This is another demonstration by ZANU PF leaders that they are not concerned about the welfare of the citizens but their own selfish needs and survival. They are only keen on getting protection from their ruthless and manipulating leader who want to die in power. Therefore this can be described as a show off and cruelity especially to people in Masvingo who are forced to prepare for the bash when they live in abject poverty. Was it going to be prudent if the money was used to alleviate hunger and starvation in Zimbabwe or buying drugs which are in short supply in hospitals.Â  However Mugabe and his regime have decided to feast.

This is a high state of insensitive and a curse to the people of Zimbabwe who have endured 35 years of mismanagement and now the country is fast grinding to a halt-a repeat of the 2008 disaster. God help us!!! But as a country when are we going to say enough is enough!!