A photograph has emerged showing a British citizen whose claim on a white Zimbabweanâ€™s farm saw him evicted last month smiling next to Grace Mugabe during a visit to the orphanage she runs. 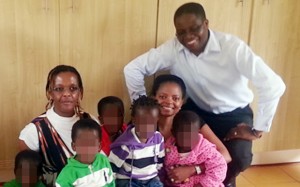 Dr Sylvester Nyatsuro, 57, was one of thousands of Zimbabweans who left the country during the height of the political unrest after 2000 and now runs an NHS slimming clinic in Nottingham.

Last September, he and his wife Veronica went to Kingston Deverill, a tobacco farm 145 miles north of Harare which is owned by Philip and Anita Rankin, with a letter from the government allocating the land to him.

When the Rankins refused to leave, settlers moved into a cottage on the land using a car registered to Dr Nyatsuro.

In January, a warrant was issued for Mr Rankinâ€™s arrest and days later, a large contingent of police broke into the property and dragged him away by force, loading his furniture onto lorries sent from Harare. Mr Rankin was released several hours later but has not returned to his farm.

The raid was one of the most dramatic and heavy-handed in recent memory and baffled Zimbabweâ€™s dwindling band of white farmers.

Mr and Mrs Rankin maintain the farm they bought after independence in 1980 had already been whittled away by successive land claims and had now been gazetted by the government as immune to any further land claims.

A lawyer acting for Dr Nyatsuro told The Telegraph he never specifically requested the Rankinâ€™s farm but had simply applied for a farm to settle on under Zimbabweâ€™s land reform programme.

He denied any knowledge of the police action â€“ which Mr Rankinâ€™s lawyers have declared unlawful since a court process was ongoing â€“ and that any political influence had been brought to bear.

â€œIt is our understanding that many Zimbabweans regardless of political affiliation benefited from the land reform programme,â€ Fungai Chimwamurombe, a Harare-based lawyer, wrote in a legal letter to the Telegraph last month.

â€œWe are not aware of their relationship status with the president and indeed the basis used for them to benefit from the programme.â€

Police sources told the Telegraph that Dr Nyatsuro and his wife, who works as a receptionist at the Willows Slimming Clinic he runs in Carlton, Nottingham, had ties to Grace Mugabe.

In a series of photographs taken during a visit to Mrs Mugabeâ€™s Mazowe Orphanage which is thought to have taken place in March last year, the smartly-dressed couple are pictured smiling at the camera alongside another unidentified couple and Mrs Mugabe.

In others, they are seated with children on their knees and a suitcase of new presents open nearby which the children appear to be unwrapping.

A spokesman for the First Couple could not be reached for comment and Mr Chimwamurombe and the Nyatsuros did not respond to requests for comment.

Kate Hoey MP, chairman of the All-Party Group on Zimbabwe, said the photograph appeared to suggest a possible reason for the Nyatsuroâ€™s expedited claim.

A Foreign Office spokesman in January voiced concern that the seizure of the farm “did not follow the process as described by the constitution”.

“We are aware of the allegation that the beneficiary of this farm may be a British citizen,” added the spokesman. “We will consider what further action to take.”

It is understood that James Duddridge, Africa minister, has asked the Home Office to look at whether Dr Nyatsuro could have his citizenship stripped were he to push ahead with his claim.

However, Don Flynn, an immigration expert from the Migrants Rights Network, said unless Dr Nyatsuro had retained his Zimbabwean citizenship, the UK would not be allowed to make him â€œstatelessâ€ under human rights legislation.

â€œThe general rule in African countries is that they donâ€™t recognise dual citizenship,â€ he said. â€œIf a Zimbabwean national becomes a citizen of another country, he would lose his Zimbabwean citizenship.â€

Dr Nyatsuro was born in eastern Zimbabwe and was head boy at Nyatsime College, a private school in Chitungwisa, a dormitory town adjacent to Harare.

He studied for his medical degree at the University of Zimbabwe and graduated in 1997. He is thought to have worked at Parirenyatwa Hospital, Harareâ€™s main state medical facility which was once renowned as a world class hospital but starved of cash during Zimbabweâ€™s economic downturn.

When he moved to the UK in 2000, he registered to operate as a GP with the NHS.

He has no record of any political activity in Zimbabwe but like tens of thousands of people, left as Zanu-PF began persecuting members of the new opposition party, the Movement for Democratic Change.

Once in the UK, which became colloquially known as Harare North among emigrants, many Zimbabweans claimed political asylum although it remains unknown if Dr Nyatsuro was among them. Last year the diaspora, mainly from the UK and South Africa contributed half foreign investment into Zimbabwe.

Today, Dr Nyatsuro drives a BMW four by four and lives with his wife and their three children in a Â£700,000 five-bedroom house.

Meanwhile in Zimbabwe, the court battles over the Rankin farm continue. This week, a court ruled that the farm invaders living on Mr Rankinâ€™s farm should leave and he should be allowed to return pending the outcome of a trial to determine whether the farm can legitimately be claimed under the reform programme.

He told the Telegraph he had not yet packed his bags to return. â€œIâ€™m very much in limbo and donâ€™t really know what the future holds,â€ he said on Friday. â€œNo one has enforced the order to remove the invaders at the moment. It would have to be the local police with the sheriff but they are the ones who evicted me.

â€œI am tired of all these court cases and running out of money. I donâ€™t know which way is up right now.â€