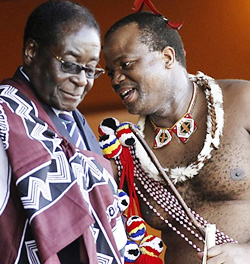 Birds of a feather … President Mugabe and Swaziland’s King Mswati

“Whilst activists in Angola, Swaziland and Zimbabwe were rounded up on the streets, Sudan’s President Omar al-Bashir was permitted to travel unhindered to the AU (African Union) conference in South Africa,” the rights agency said in its annual report.

Bashir is wanted by the International Criminal Court (ICC) for alleged war crimes related to the conflict in the Darfur region of Sudan.

South Africa, which is a member of the Hague-based ICC, did not arrest Bashir during the summit in Johannesburg last June on grounds that he had immunity.

But a court in the city ruled that the authorities were legally bound to arrest him.

During their last AU summit in January in Addis Ababa, African leaders backed a Kenyan proposal urging a pullout from the ICC on the grounds that it unfairly targeted the continent.

But Amnesty’s research director for Africa, Netsanet Belay, said that the “threats of withdrawing will only undermine justice for victims.”

“In Zimbabwe, freedom of expression, association and peaceful assembly continued to be severely restricted,” said Muleya Mwananyanda, the deputy director of Amnesty International in southern Africa.