Arenâ€™t these the most adorable twins ever? 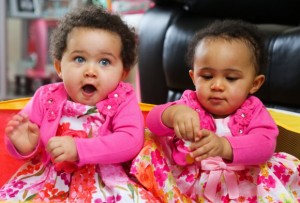 Identical sisters Amelia (right) and Jasmine – who have different skin an eye colour.

Amelia and Jasmine, both one year old, are thought to be the first twins in the UK with different skin colours, despite coming from the same egg.

Before they were born their mum, 37-year-old Libby Appleby, was told by doctors that the babies would look so similar theyâ€™d need to be marked with ink.

However, when they were delivered at University Durham Hospital, medics â€˜gaspedâ€™ because the sisters had different skin and eye colours.

â€˜When they were born, we were flabbergasted â€“ even the doctors couldnâ€™t believe it,â€™ she said.Â â€˜They look like theyâ€™re different races. Amelia is the spitting image of her dad, while Jasmine is a mini version of me.â€™ 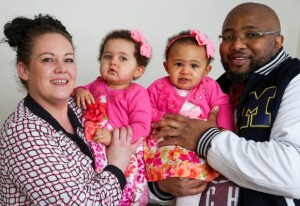 Libby Appleby from Durham with her one year old identical twins Jasmine (left) and Amelia, with her partner Taffy.

Libby and her partner of three years, electrical engineer Tafadzwa Madzimbamuto, 40, found out they were expecting in June 2014.

The twins are monozygotic, meaning they were formed in the same embryo, but developed in separate sacs. However aÂ placenta sample confirmed the babies are 100 per cent genetically identical.

She added that Amelia and Jasmine could look different if there was a change in the way each developed in the womb.

â€˜An exception might be when a change in one of these happens after the twins separate in very early development â€“ called somatic mutation,â€™ she added.