After months besieged on their farm at Centenary, 20 police armed with AK 47s on Friday forcibly evicted Phillip Rankin and his wife. 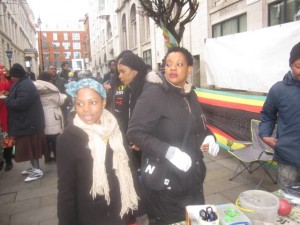 The farm has long been coveted by British medical practitioner Dr Sylvester Nyatsuro and his wife Veronica, who are reported to be connected to Grace Mugabe. Mrs Nyatsuro is alleged to have planted invaders on the farm when she was over last year on a visit from the UK.

Zimbabwe human rights campaigner Ben Freeth said the police had shown no legal documents to justify their action, whichcomes while court proceedings are still going on. He said he had advised MrRankin to quote section 74 of the constitution which says no person may be evicted from their home without a court order. â€˜The police just laughed at themâ€™.

The police refused access to lawyers acting for Mr Rankin, loaded his furniture onto lorries along with Mr Rankin and drove off. We understand he was later released. Freeth added: â€˜Despite the drought the Rankins are in the middle of harvesting wonderful crops this season. A message from another observer said: itâ€™s the end of the month so who pays the workers, what happens to them now?â€™ (For video clips see:Â https://www.flickr.com/photos/zimbabwevigil/albums/72157661801274773).

The Vigil has staged several demonstrations outside Dr Nyatsuroâ€™s clinic in Nottingham questioning why a British citizen resident in the United Kingdom for the past 10 years should seek to dispossess a Zimbabwean citizen who bought his farm in Zimbabwe with the approval of the Mugabe government.

The Nyatsuros threatened legal action against us â€“ a tactic they have successfully used to intimidate the media. We invited Dr Nyatsuro to our forum last week to explain himself. We were told they wanted to talk to us but he did not come. On Monday (25/01/2016) we emailed Mrs Nyatsuro that we would take further action if they did not drop their claim to the farm and requested a reply within 7 days (see: http://www.zimvigil.co.uk/vigil-news/campaign-news/749-email-sent-to-mrs-nyatsuro-on-monday-25th-january-2016). In a phone call Mrs Nyatsuro said she was going to Zimbabwe the next day.

The behaviour of the Nyatsuros has disgusted Zimbabwe exiles in the UK and the Vigil is to protest outside their Nottingham clinic on Friday 5th February (see Events and notices for details).

The Vigil will also be running the following petition to Prime Minister David Cameron calling for an investigation into the Nyatsuros.

Dr Nyatsuro is a British citizen, long resident in this country, yet he has illegally seized a farm in Zimbabwe owned by a white Zimbabwean farmer, Mr Phillip Rankin, who bought it with the approval of the Mugabe government. Dr Nyatsuro and his wife are reported to be connected to Grace Mugabe.

We ask your government to consider revoking Dr Nyatsuroâ€™s citizenship on the grounds that â€˜it was obtained by means of fraud, false representation or concealment of any material factâ€™ (see: Deprivation of British citizenship and withdrawal of passport facilities â€“ file:///Users/GG/Downloads/SN06820%20(1).pdf: House of Commons Library). We also question his suitability to run an NHS clinic in Nottingham while farming in Zimbabwe.

FOR THE RECORD: 41 signed the register.