The row over the installation of a boom gate at Lake Chivero has spilled into court as clubs and tour operators take action to protest the handling of National Parkâ€™s affairs at the lake. 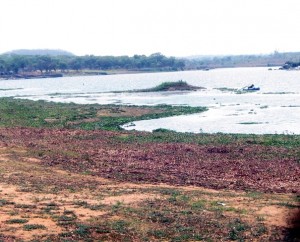 Lake Chivero is drying up

The legal contestation comes after many fruitless attempts by the clubs and operators to engage the Zimbabwe Parks and Wildlife Management Authority, commonly known as National Parks, on many issues. Among the most important is stopping the National Parks collection of entry fees in contravention of their own regulations, SI 362 of 1990 page 20075, 6 (1) which state that-an entry point has to be designated by a written notice by the director on a prescribed or a designated road.

The authority has also been criticised over its handling of fish stocks in the lake, as they continue to issue angling licenses to private fisherman in spite severely depleted populations. This has been attributed to rampant poaching, as well as the huge levels of commercial fishing taking place. When the lake was first constructed, an environmental impact assessment recommended that only two commercial fishing licenses should be issued rather than the 39 issued and in operation today.

Under the same National Parks Statutory Instrument Chapter 8 Subsection (B) parks have prohibitions that state that without permission from an officer, no person shall within the parks and wildlife estate cause any noise or behave in any manner likely to disturb wildlife or any person or commit any act liable to endanger the adequacy or purity of any water.

But Lake Chivero has a huge problem with noise pollution which is out of control due to the increase in the number of night clubs operating along the lake, not to mention the appalling state of waste disposal, and the poaching of trees and fish (see Harare News Issue 27, November 2015).

As a result of National Parksâ€™ mismanagement, a total of nine clubs have closed, citing the decline in customers and the continued decline of conditions at the lake. The remaining clubs and operators have downsized their work forces. Compounding matters is the fact that the Lake is at the lowest level it has been in the last twenty years due to poor rains.

The class action brought before the high court late in December 2015 by the Lake Chivero Users Association (LCUA) was deferred to 2016, frustrating the Ministry of Tourism and Hospitality efforts to entice school groups and tertiary students to tour the Lake and its environs. In an interview with Harare News, Tourism and Hospitality Minister, Walter Mzembi, said the thrust of the new tourism plan being crafted is to promote domestic tourism and give every Zimbabwean child a chance to visit a natural wildlife area close to their locality. This is being diminished by the various fees and tolls.

Lake Chivero, which supplies water to Harare and neighbouring towns, and the surrounding National Parks, was designated as the recreational area for Harare some 60 years ago. Over the last 15 years, a gradual decline in environmental management and quality has forced facilities to close. As standards have dropped, the lake and surrounds have developed a bad reputation. According to the LCUA, the class action is a last resort as National Parks have repeatedly refused to discuss issues relating to the deteriorating state of the lake.

Vice-chairperson of the LCUA Gary Stafford said that the LCUA has been responsible for maintaining roads, putting up signage, and donating fuel to the National Parks anti-poaching unit â€“ efforts that have seemingly gone unnoticed and unreciprocated by the authorities.