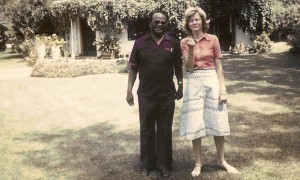 iana Mitchell with the journalist Willie Musarurwa at her home in Highland, Harare

The Zimbabwean political activist and writer Diana Mitchell, who has died aged 83, was an active opponent of Ian Smith in the 1960s and 70s, and later used her political skills in an equally determined critique of Robert Mugabeâ€™s regime in the 90s. A suburban housewife and teacher, she had a flair for grasping media attention and an extraordinary ability to create wide-ranging networks and political relationships that were a source of inspiration for liberals and nationalist fighters alike.

Mitchell made a name for herself as a liberal campaigner in the 60s, regularly writing letters to the state-controlled Rhodesia Herald newspaper criticising the racist policies of Smithâ€™s Rhodesian Front (RF) government. Her first tangible political engagement began in 1966 when the Forest nursery school in Salisbury (now Harare) for the children of black domestic servants was bulldozed by the government. What began as a campaign to save one school led Mitchell to establish a national drive for better education of black children.

Arguing for this cause exposed her to intransigent government ideology â€“ one minister told her that education for black children would â€œspoil themâ€ and make them â€œdiscontented with their lotâ€ â€“ and it pushed her to work directly for the regimeâ€™s end. She helped establish the Centre party in 1968, at the time the only party dedicated to a non-racial future, and became its press and public relations officer. Despite her support for the Centre party, she stood (unsuccessfully) as an independent in the 1974 parliamentary elections, mainly due to frustration that the party was sidelining qualified women. Political life was notoriously chauvinistic in 70s Rhodesia, and in his 1984 book White Liberals, Moderates and Radicals in Rhodesia, Ian Hancock wrote: â€œThis was especially true of the liberal parties, and of the CP, which brought together men who could be hesitant and preoccupied and women who were bright and energetic. An excellent example of the latter was Diana Mitchell.â€

It was in the late 70s, as civil war and diplomatic pressure finally began to erode the RFâ€™s hold on power, that Mitchell came into her own. Commissioned with the task of getting nationalist and RF leaders to talk to each other, she built up an unrivalled knowledge of the key players in the nationalist struggle. Working with the British-born journalist and broadcaster Robert Cary, and with the support of her friend the journalist Willie Musarurwa, she began to compile a detailed inventory of African nationalist leaders in Rhodesia.

Travelling as far as Zambia and Tanzania, where many worked in exile, she interviewed members of this barely documented group, largely viewed by Rhodesiaâ€™s white population (and many in the west) as communist terrorists. Her subsequent potted biographies of 66 nationalists, published in 1977 as African Nationalist Leaders in Rhodesia: Whoâ€™s Who, featured many figures who would go on to become key players in the post-independence government. It was described in Rhodesian military circles as â€œMrs Mitchellâ€™s Gook Bookâ€, but was seen by those it featured as a badge of honour.

The book soon became an indispensable source for all sides. During the flurry of meetings and celebrations at independence in 1980, Mitchell found herself sitting between Ken Flower, Smithâ€™s chief of central intelligence, and Emmerson Mnangagwa, Mugabeâ€™s security chief, who is now vice-president. Both told her: â€œWe get all our information from your book.â€

Despite her delight at independence, Mitchell soon became a critic of Mugabeâ€™s government, as, by the middle of the 80s, details emerged of a state clampdown on opposition supporters in Matabeleland. She began a weekly column in the Financial Gazette, voicing her growing dissatisfaction with the Mugabe regime and in particular the restrictions it placed on the media. In 1991 she was a founding member of the Democratic Forum party (later the Forum party), which was in favour of multiparty democracy, judicial independence and the reinstatement of a free market. Although never shy to criticise political injustice, Mitchell maintained friendships with figures across the political spectrum. Her work on Zimbabweâ€™s politics drew its strength from a fascination with people as shapers of history.

Her ability to relate to people from different backgrounds and ideologies began early. She was born in Salisbury to Elliott Coates, an officer in the merchant navy, and Mary Peck, an actor. The marriage, which was enforced after Mary became pregnant, resulted in near destitution after Elliott was dismissed from the navy and disowned by his family. In Salisbury, Elliott worked as a labourer and Mary as a fortune-teller. The marriage ended in 1937, and Diana was fostered during the second world war while her mother worked in a munitions factory.

Despite material deprivation, Diana benefited from access to a good and relatively liberal education. She attended Evelyn high school in Bulawayo, where she remembered being taken to listen to black liberationist leaders, and then the University of Cape Town in South Africa in 1951, where she studied history and Shona, one of Zimbabweâ€™s main languages. After taking a diploma in education she taught at secondary schools in Gwelo, Fort Victoria and Salisbury, lectured on science education at the University of Rhodesia, and was principal of the Harare Polytechnic business studies department for several years until 1984, when she retired from teaching to concentrate on her journalistic writing.

She was an avid collector of political cuttings and documents relating to Rhodesia and Zimbabwe, and her collection was later split into two archives, the first acquired by the University of Cape Town and the second by the Hoover Institution at Stanford University in the US.

She married Brian Mitchell, a hydraulic engineer, in 1956, and the couple had three children, Catherine, Tim and Andy. Having eventually grown weary of life under the Mugabe regime, Diana and Brian moved to the UK in 2003.

Brian died in 2010. She is survived by her children, three grandchildren and four great-grandchildren.