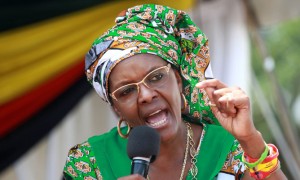 First Lady Grace Mugabe at a rally in Mazowe

He was addressing thousands of his supporters who converged at the Great Zimbabwe Monuments for his 92nd birthday celebrations where he also granted a request by youth secretary Pupurayi Togarepi to deal with the youths.

The event, which was attended by cabinet ministers, politburo members, foreign diplomats and school children, was beamed live on national television.

â€œIf you find the youths, I do not know if they would have taken dagga, denigrating their elders to the point of denigrating the party leadership,â€ Mugabe said in Shona.

â€œIt is so disgusting to find the way they have been denigrating Mai Mugabe, the Presidentâ€™s wife. And this is being splashed on news agencies like Aljazeera; placed on record, being sung about, for whose attention?â€

â€œWe have noted that some close to you in your social life including your wife Dr Grace Mugabe, her so called allies in the party and some in government seem to have hatched an evil plan to destroy the party which you have so much nurtured and protected and they are committed to that project and want to see its fruition,â€ said former Mashonaland Central Zanu PF Youth League chairperson Godfrey Tsenengamu who said he was national coordinator for the campaign.

The youths were referring to the so-called Generation 40 which reportedly comprises hawkish party politicians Saviour Kasukuwere, Jonathan Moyo and Patrick Zhuwao who have all rallied behind what seems like a Grace bid to succeed her husband.

But Mugabe said on Saturday said â€œit was taboo to find the youths making disparaging commentsâ€.

â€œWe cannot have people of such conduct. Not at all! We cannot lead such misguided youths,â€ Mugabe said.

In an earlier address, Togarepi asked for Mugabeâ€™s blessings to deal with what he said were wayward youths in the party.

â€œWe will give you all the support you need in the party for us to correct ourselves and correct our direction,â€ Mugabe said in response.

â€œThe party was close to going astray. So if the youths go astray, we are all gone.â€

Mugabe said both the youths and women needs to be guided in the party to preserve the party unity.