A GIANT birthday cake supposedly pleading â€œeat me!â€ was on show at State House in Harare Monday as President Robert Mugabeâ€™s staff threw a party to celebrate his birthday. 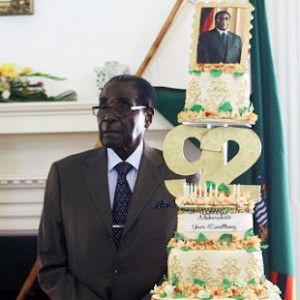 Mugabeâ€™s turned 92 on Sunday and Mondayâ€™s low-key shindig was just an appetizer; the bigger bash will be held in Masvingo at the weekend with supporters spending more than $800,000 to celebrate with the veteran leader.

Supporters chose the historic city because it hosts the Great Zimbabwe monuments â€“ a fitting stage for the â€œgreat leaderâ€. But the site is also known as the Great Zimbabwe Ruins â€“ and observers have wondered whether cheeky insiders were trying to remind Mugabe what he has reduced the country to?

The partying, an annual indulgence by the ruling Zanu PF party, has been criticised by the opposition, coming as it does at a time Zimbabwe is struggling with a severe drought. The country has pleaded for $1.5 billion to feed more than a nearly two million citizens faced with hunger.

But Mugabe has ignored calls to cancel the celebrations and, on Monday, indicated that he was looking forward to the festivities.

â€œThe Chief Secretary (Misheck Sibanda) said they did this as a surprise event. But Iâ€™m no longer surprised because every year, I now know that once I strike another birthday, this event is bound to follow,â€ Mugabe said.

â€œBut we are not only celebrating that we have managed to get to this year 2016 where we are celebrating the 92nd birthday of the President.

â€œWe have also raised our status, our independence became a tool and the means with which we have interacted with others.â€

The veteran leader also cited his major achievements of the past year.

â€œThrough you (staff at the presidency) and your support, I have managed to lead not just Sadc but the whole of Africa and I did it not as an individual but knew that it was Zimbabwe that was behind me.

â€œI think with that support, I got the groundwork having been done in Sadc, left a good name, a good name at all costs bequeathed to them.â€

Meanwhile the opposition Peopleâ€™s Democratic Party (PDD) led by former finance minister Tendai Biti, congratulated Mugabe on his milestone but added that he had left a train of â€œdestructionâ€ in his wake.

â€œAt 92, Mugabe cuts as a lone figure in leadership,â€ PDP said in a statement.

â€œ100% of all men and women of his age have long retired and are enjoying their remaining years of life in comfort, sharing their lifelong wisdom with grandchildren and thus ensure posterity.

â€œThat Mugabe is still clinging to power and is at the centre of Zimbabweâ€™s current challenges in his old age is regrettable and unacceptable.â€

The party cited the dire state of the countryâ€™s economy with GDP per capita declining from nearly $600 in 1980 to $260 over the thirty-six years Mugabe has been in power.

â€œUnemployment stands at 92%, with 98% of youths employed in the informal sector, 49% of Zimbabweans are malnourished and 83% are living on less than US$1 a day while 65% are regarded as living in extreme poverty.â€

The opposition outfit added: â€œOn the political front Mugabe has fared no better.

â€œSince 1980, Zimbabwean elections have been haunted by the twin demons of violence and rigging starting from the Gukurahundi cleansing attempt which was designed to create a template for a one party state, through the madness of the 1990s when the state used extreme violence on workers and students to the electoral violence of the 2000s, Mugabe has left a trail of blood.

â€œThis is the disaster which Mugabe has left for the country and at 92 years it is certain that he will not live to see the worst side of his ruinous rule.â€