Heal Zimbabwe Trust (HZT) and Zimbabwe Civic Education Trust (ZIMCET) have embarked on community awareness raising campaigns on the roles and functions of the five Independent Commissions that are provided for under the constitution. 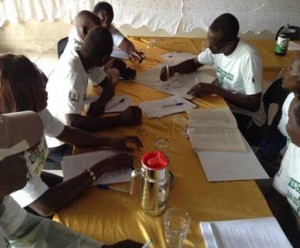 Participants during the Bikita meetings.

From the 4th to the 8th of February 2016, the two organisations held independent Commissions awareness raising campaigns in Buhera, Bikita and Gokwe. A total of 65 community peace club members attended the programme which targeted community opinion leaders, Traditional leaders and members of peace clubs. The awareness campaigns specifically targeted publicising the ZHRC and the NPRC.

The campaign was welcomed by Traditional leaders who acknowledged that information concerning the functions of Independent commissions has been lacking inÂ  their communities. â€œ..We are starved with information, all things happen in Harare only. This is why we continue to face violations such as unequal distribution of food aid. Up to now we have not heard from ZHRC. This is our first time hearing about the NPRCâ€, said Village head Chabvongodze from Buhera Ward 5. The communities also expressed concern about some shortcomings in the NPRC Bill including the many powers conferred to the Minister.

The awareness programmes come against a background where there is lack of information pertaining to the functions and roles of Independent Commissions which have a constitutional mandate of securing the observance of democratic values and principles.

In view of the above concerns, HZT and ZIMCET urge government and concerned commissions (especially the Human Rights Commission) to consider decentralising their operations to increase their geographical coverage and access. The organizations also urge government to ensure that the NPRC Act is victim centred for it to achieve its constitutional mandate of ensuring post-conflict justice, healing and reconciliation.

Independent Commissions that support democracy are provided for in Chapter 12 of the Constitution. The two organisations will also carry out similar campaigns in Hurungwe.