Two of the UKâ€™s main newspapers published lengthy articles today on the Nottingham doctor, Sylvester Nyatsuro, who has seized a farm in Zimbabwe. The articles coincided with the presentation of the Vigilâ€™s petition to 10 Downing Street calling on the UK to revoke Dr Nyatsuroâ€™s British citizenship. 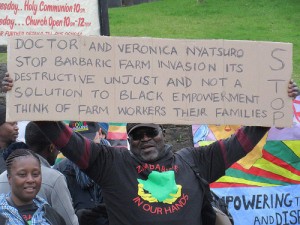 What prompted the two papers to revisit the story was the emergence of photographs which showed Dr Nyatsuro and his wife Veronica socialising with Grace Mugabe. As the Daily Mail put it â€˜Grinning with Mrs Mugabe, GP who was handed white coupleâ€™s farmâ€™. The photograph was seen as disproving the Nyatsurosâ€™ denial that nepotism had played a part in the allocation of the farm to someone who has become a British citizen and lived in the UK for the past 15 years.

The mass circulation Daily Mail has been assiduously digging away at the scandal. For their latest report see:Â Â http://www.dailymail.co.uk/news/article-3465233/Black-British-doctor-seized-farm-white-Zimbabwean-couple-personally-knows-Mugabe-family-extraordinary-picture-reveals.html. That it has been joined so enthusiastically by the upmarket Daily Telegraph perhaps reflects the Telegraphâ€™s irritation at the Nyatsuros earlier blustering legal threats against the paper which prompted it to drop a previous story from their website. For the latest Telegraph story see:Â http://www.telegraph.co.uk/news/worldnews/africaandindianocean/zimbabwe/12175491/Photograph-emerges-of-Zimbabwe-land-grab-British-doctor-with-Grace-Mugabe.html.

The same Zanu PF bullying tactics were made against the Vigil but we have not been deterred from demonstrating outside their Nottingham clinic 130 miles north of London to show their patients what sort hypocrites the Nyatsuros are. Our latest protest yesterday was attended by 50 from as far afield as Edinburgh and Portsmouth.

A Daily Mail journalist interviewed us there. She then tried to ask Veronica Nyatsuro some questions, only to be pushed angrily away. But fortunately in the UK we can stand up to Zanu PFâ€™s bullying. Our demonstration was addressed by Vigil founder member Ephraim Tapa who said the Nyatsuros were part of last days Zanu PF looting frenzy, which has also seen other farm seizures and chaos in Marange.

Many of the Nottingham demonstrators turned up to support the presentation of the Vigil petition addressed PrimeMinister Cameron which was handed in by: Enniah Dube, Sharon Moyo, CathrineMusa, Chipo Parirenyatwa, Roseline Mukucha and Vinbai Karumbidza. The petition reads: Zimbabwean exiles in the United Kingdom and sympathisers are appalled by the behaviour of Dr Sylvester Nyatsuro and his wife Veronica who run the Willows Medical Centre in Nottingham. Dr Nyatsuro is a British citizen, long resident in this country, yet he has illegally seized a farm in Zimbabwe owned by a white Zimbabwean farmer, Mr Phillip Rankin, who bought it with the approval of the Mugabe government. Dr Nyatsuro and his wife are reported to be connected to Grace Mugabe. We are puzzled why a British doctor should want a farm in Zimbabwe since he and his wife are apparently in full-time employment here and have no known farming expertise in a country facing starvation. We ask your government to consider revoking Dr Nyatsuroâ€™s citizenship on the grounds that â€˜it was obtained by means of fraud, false representation or concealment of any material factâ€™ (see: Deprivation of British citizenship and withdrawal of passport facilities â€“ file:///Users/GG/Downloads/SN06820%20(1).pdf: House of Commons Library). We also question his suitability to run an NHS clinic in Nottingham while farming in Zimbabwe.

Â It was accompanied by this letter:Â  Dear Prime Minister: Zimbabwean exiles in the United Kingdom and supporters ask your government to look at the case of Dr Sylvester Nyatsuro, a GP running a clinic in Nottingham with hiswife Veronica. Dr Nyatsuro is from Zimbabwe but has live in the UK for the past 15 years and is now a British citizen. The Sunday Times says he came here as an asylum seeker but this has not stopped him from violently seizing a farm inZimbabwe owned by a Zimbabwean citizen, Phillip Rankin and his family. We are not aware that Dr Nyatsuro has any farming knowledge or whether he intends to relinquish his Nottingham practice so we wonder what justification he has to take over one of the last remaining white-owned farms in Zimbabwe, beyond being given the go ahead by the Mugabes with whom he and his wife are reported to have connections. The Zimbabwe Vigil draws your attention to the starvation threatening millions of Zimbabweans and the urgent need to resuscitate agriculture and asks you whether â€˜slimming expertâ€™ Dr Nyatsuro is a person likely to further this goal. We believe that he and his wife are Mugabe predators and Dr Nyatsuroâ€™s citizenship should be revoked because we believe it must have been obtained under false pretences. We enclose a petition signed by people from around the world who have passed by the Zimbabwe Vigil, which has been held outside the Zimbabwe Embassy in London for more than thirteen years. The petition has also received more than 7,000 online signatures.

FOR THE RECORD: 77 signed the register.