The MDC unreservedly condemns the police brutality against the war veterans who had gathered for a meeting at the City Sports Centre in downtown Harare on Thursday, February 18, 2016. 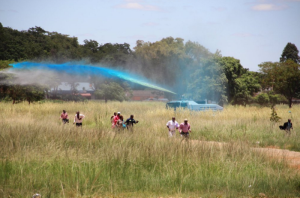 The action by the police to suppress and illegally disperse a peaceful meeting by the liberation war heroes and heroines is a total negation of the tenets of democracy for which many of these gallant sons and daughters paid the supreme sacrifice. The need for a democratic dispensation in Zimbabwe cannot be over- emphasized and the action by the police vindicates what the MDC has always been saying regarding the indiscriminate and illegal use of force by the police; particularly against opposition political activists ever since the formation of our party in September 1999.

No rocket science is needed to discern that Zanu PF is imploding under the weight of endless and mindless factional fighting. Things have fallen apart and the centre can no longer hold. Zanu PF is now a political party in terminal decline and it is more than apparent that Robert Mugabe is no longer in charge. The demise of the Zanu PF regime is bringing along with it unprecedented socio-economic suffering and severe political strife amongst the majority of Zimbabweans.

Instead of attending to matters to deal with the resuscitation of the comatose economy as well as addressing the effects and impact of the impending drought that is set to affect no less than 3 million Zimbabweans, Robert Mugabe and his faction-ridden regime are at sixes and sevens and utterly clueless on the way forward. This is abundant evidence of the fact that Robert Mugabe, at the advanced age of 92, is no longer fit for purpose. The country is on virtual auto-pilot as the feuding factions within the crumbling Zanu PF regime are engaged in mortal combat.

It is common knowledge that peace and stability are imperatives for sustainable social reconstruction, economic recovery and general development of the nation and Mugabe, in his state of incapacitation, should not be allowed to hold the nation to ransom for a day longer.

The urgent need for Robert Mugabe to immediately step down as Head of State is now a strategic necessity if we are to avoid a total and complete collapse of the State in Zimbabwe. The feuding factions within the collapsing Zanu PF political edifice, of late, have been exchanging threats of physical violence against each other and indeed, if the situation remains unchecked, Zimbabwe can easily explode into a devastating civil war.

It is imperative, therefore, for all patriotic Zimbabweans, including the war veterans, to urgently come together and exert appropriate political and constitutional pressure to ensure that President Robert Mugabe steps down from office. The country is now being run by a shadowy group of recycled political turncoats and later day â€˜â€™revolutionariesâ€™â€™. This shadowy and obscure group of self-confessed political thugs and corrupt opportunists is now a serious threat to national cohesion and national security.

President Robert Mugabe is no longer in charge of the country because this shadowy group of political gangsters has virtually usurped all State power from him. Mugabe is now just a lame duck President; under siege from a vicious and dangerous clique of political thugs and unpatriotic, greedy and deeply corrupt political gangsters. All those nefarious political thugs who gave orders to disturb and disperse the lawful and peaceful meeting of war veterans should be thoroughly investigated and the full wrath and might of the law should descend upon these reactionary elements.