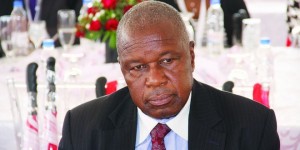 But the ZNLWVA held its national executive meeting in Harare Monday where nine provinces threw their weight behind Mutsvangwa.

The associationâ€™s Mashonaland Central provincial chairperson did not attend the meeting.

Addressing a press conference after the meeting, Mutsvangwa said his suspension which was announced by Manicaland provincial minister Mandi Chimene had been rejected by the national association.

Mutsvangwa said during the politburo meeting, Moyo and Kasukuwere were given an opportunity to air their grievances but the two spent the time supporting Mahoka.

â€œThe two spoke at length accusing me of messing things up in the party and praising chimukadzi change chataura panze (praising Sarah Mahoka) who does not have any respect for the leadership of the party,â€ said the war veteransâ€™ leader.

â€œI also spoke and exposed the shenanigans of these two people and chronicled their mischief starting from way back supported by detailed data and pictures.

â€œThe President said okay, â€˜I have heard it allâ€™ and showed his mercy to some people who did not have the support of the politburo members.â€

Mutsvangwa added that Mugabe then said that â€˜as you leave this meeting, I call for unity for the benefit of the partyâ€™.

â€œBut surprisingly hours after the Politburo meeting, a rally was called in a rural area, ignoring the capital city environs.

â€œThere, they came up with stupid resolutions, supported by wayward members.â€

He warned liberation fighters to be wary of the ruling partyâ€™s â€œtraditional enemies and regime change merchantsâ€ who were now â€œcoming in different coloursâ€ and further mocked Moyo and Kasukuwere.

â€œToday they have now recruited these two members; one a young man and the other one who was at Mgagao but later ran away from the liberation war.

â€œAnd all these days he (the war deserter) has been denying that he was there but later admitted after I exposed him. He now claims that he ran away because he was being abused.

â€œNo! You were being beaten because you were a spy and comrades wanted to know your position in the struggle.â€

Mutsvangwa said, as an executive, they would not pass a â€œvote of no confidenceâ€ against minister Chimene and her supporters â€œas they have left ZNLWVA of their own accord and its within their rights to form their own break away associationâ€.