As ZANU PF and its government prepares to host a lavish 92nd birthday bash for Zimbabwean President Robert Mugabe, reportedly to the tune of US$800,000 - whilst most people in Zimbabwe are wallowing in squalor and hopelessness, while desperately scrounging for a morsel to eat - one can not help but wonder why some people regard Mugabe as worthy of such heartless extravagance. 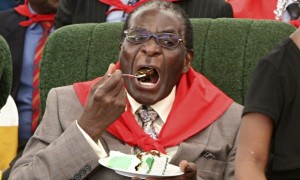 If statements by some of his bootlickers – failures in life, whose only hope for survival is through praise-singing for the President – are anything to go by, then Zimbabwe is in serious trouble.

If these sycophants had merely praised their leader’s imagined or real exceptional leadership skills, that would have been acceptable, but to equate him to Jesus Christ not only crosses all the red-lines of hero-worshipping, but is blasphemous in every sense.

I am not going to be drawn into a religious debate, but as a Christian, I will not stand by whilst my Lord and Saviour’s name is dragged through the mud by a group of people who have presided over the suffering of millions of Zimbabweans.

For starters, the Bible itself says that ‘all have sinned and fallen short of the glory of God’, as such Mugabe is just a sinner as myself, and can not – by the wildest stretch of the imagination – be compared to Jesus Christ, who was and still is perfect and without sin.

Secondly, Jesus Christ is God. Mugabe is not! Period.

No matter how those in ZANU PF may view the greatness of their leader, the fact is that he is not God, and should never be compared to Him, even during episodes of their wildest drunken excitement.

Thirdly, Jesus Christ’s apostles and disciples never, at any point, held birthday celebrations for Him – even after His resurrection and ascension – although they had accepted that He was God.

So, can someone in ZANU PF tell me why – since they have the blasphemous audacity to compare Mugabe to Jesus Christ – they found it necessary not only to hold a birthday bash for him, but also a obscenely lavish one costing over US$800,000 in the face of a starving nation?

Would Jesus Christ have accepted such a lavish birthday bash, whilst surrounded by poor and suffering people?

Actually, from my understanding of the Bible, He was poor and lived a very humble and modest life with ‘nowhere to lay His head’ – unlike the leaders we have in this country.

I am sure we will hear the same old dry answers from the ZANU PF gang that US$800,000 would not add much to the welfare of the people.

Well, Zimbabweans are suffering, and every cent counts.

If every dollar that the President has spent over the past, let’s say, five years, on avoidable trips, holidays, and birthday celebrations had been placed in a fund of some sort, how much would be there today?

Would we not have enough to solve some of the most pressing issues in Zimbabwe, such as food relief, medication in hospitals, and so forth.

Today, the elderly are dying just because they can not afford to buy the expensive medication that is only available at private pharmacies.

An elderly widowed and retired cancer patient (whose only source of income is a measly US$60 per month from the National Social Security Authority, despite the fact that they had being gainfully employed for 46 years, but received no pension from their employer – which they had contributed towards throughout their entire working life) is expected to pay US$70 for blood tests at a private laboratory every month – because the government laboratory’s facilities are broken down – and also needs to buy medication worth US$65 per day for the duration of the 5-day chemotherapy monthly treatment.

Would the money saved from such extravagances as birthday bashes not have gone a very long way in helping, especially the elderly?

There are some real leaders out there who use such occasions not to gorge themselves with food and drink, but donate every cent raised for such occasions for charity, and then sponsor the birthday celebrations with their own monies.

I am sure the President has enough spare change laying about somewhere to afford a lavish grandiose birthday bash – if he so desired one.

A caring leader puts his or her people first.

What father would rather have a birthday party whilst his children do not even have food to eat and no school fees?

Even if the money spent for the father’s birthday party would not be enough to pay the children’s school fees, but it can be saved, so that it would be easier to source the balance.

It would be grossly irresponsible for the father to go ahead with the party in such an environment.

Even if his friends are the ones sponsoring the party, a responsible father would kindly request the friends to fund his children’s school fees or buy food for the family, instead of buying cakes, beer and drinks.

Leaders who genuinely put the interests of their nation above theirs.

Unfortunately, the people of Zimbabwe have been taken for granted for far too long.

Just a quick look at the shameless leadership struggles within ZANU PF is enough to expose the attitude of those in power.

All their shebeen-queen-like grandstanding and shameless insults at each other, tell a story of a leadership that does not value the people at all.

The people’s cries and moaning have been received with contempt and
scorn, whilst their friendliness and patience have been taken as
weakness and idiocy.

Let the country’s leadership be told that such assumptions are not only foolhardy, but also misplaced.

Zimbabweans are not fools, and anyone who harbours such thinking is the greatest fool.

Let us never forget about the straw that broke the camel’s back.

The people of Zimbabwe demand respect and honour from their leaders.

They demand their dignity and their self-worth that was so callously striped from them restored.

The people of Zimbabwe demand and deserve real leadership – one that appreciates and values them – Â and until the nation gets such a leadership, we will remain, as we are today, leaderless.

Â° Tendai Ruben Mbofana is a community activist, communications specialist, journalist, and writer. He writes in his personal capacity, and welcomes feedback from all angles. Please call/WhatsApp: +263782283975, or email: [email protected]com