WASHINGTON DC â€” The Tendai Biti-led Peopleâ€™s Democratic Party (PDP) is calling for the setting up of a transitional authority before Zimbabwe holds its next general elections. 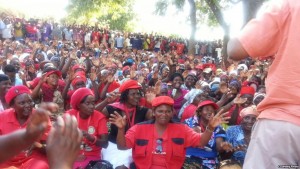 The MDC-T is strongly opposed to the formation of a transitional government.

The party argues that it wonâ€™t be tenable to hold an election without first cleaning up various institutions like the Zimbabwe Electoral Commission and related bodies that play a critical role creating a democratic state.

For perspective, Studio 7 with Obert Gutu, spokesperson of the Movement for Democratic Change led by Morgan Tsvangirai, and Jacob Mapfume of the Peopleâ€™s Democratic Party, who said a national transition authority is the only way of resolving Zimbabweâ€™s current political crisis.

He added that â€œthe government is teargassing ministers and so teargassing itself. So, let us have a transitional government where will we stop this madness and remove the toxicity.â€