Chaos erupted at the Gweru City Council Mayorâ€™s Parlor as blows were exchanged between one of the three commissioners running the affairs of Gweru and one Francis Muzorera from a newly formed Gweru Youth Residents Association. 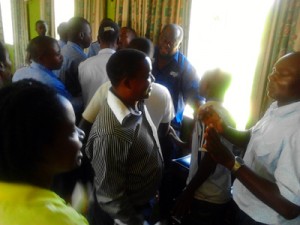 The fight was sparked by the commissionersâ€™ failure to reveal how much they were spending in allowances, during a meeting organised by Gweru Residents and Rate Payers Association (GRRA).

The meeting ended in a fist fight between commissioner Mark Choga and Muzorera from the Gweru Youth Residents Association (GYRA) after the commissioners refused to divulge how much they are spending.

The agenda of the meeting was to take the commission and council administration to task after failing to respond to a letter of demand by GRRA seeking clarity on how much the commissioners have spent in allowances, the inconsistent billing system as well as how the US$20 pump levy paid in 2014 was used.

The refusal by the commissioners to disclose their allowances further degenerated suspicions that they were squandering council funds with the commission chair, Tsunga Mhangami after being cornered by residents to answer, questioned why the residents wanted to know.

â€œModakuzivirei (why do you want to know),â€ he said before walking out of the meeting citing an appointment with a doctor leaving Mark Choga to face the residents.

Choga tried to convince the residents that the information was not a secret but however denied disclosing the figures.

The commissionersâ€™ stance resulted in residentsâ€™ tempers flaring with Francis Muzorera and another fellow member of the so called GYRA tempting to physically block Choga from leaving the venue.

Muzorera was however overpowered by Choga,who is physically superior, pushing him off into the wall before giving him a few blows in anger.

Citizens and Council Police, who were on standby quickly intervened escorting Choga out of the venue, with fuming residents protesting against Chogaâ€™s actions.

Allegations are that the commission has spent more than US$100 000 in four months instead of prioritising and channeling that money towards service delivery, but have denied the allegations.

The caretaker commission was appointed by the Minister of Local Government, Public Works and National Housing Saviour Kasukuwere after the firing and suspension of the 18 councilors on allegations of misuse funds and abuse of office.