One of the many exciting things I did when visiting our field sites in Zimbabwe at the end of last year, was to help hand out a new set of booklets based on our â€˜Space, Markets, Employment and Agricultural Developmentâ€™ project (supported by DFID-ESRC), that has now concluded. 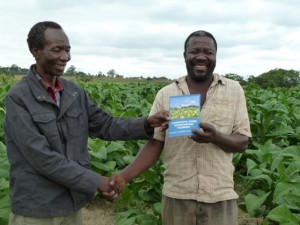 The projectÂ looked at how changing patterns of agriculture is influencing markets (upstream and downstream) and employment. We looked at a series of commodities â€“ tobacco, beef, horticulture and maize â€“ in two sites â€“ Mvurwi in Mazowe area and Masvingo district.

This allowed for some important insights to emerge through both qualitative and quantitative work. We have produced a long report if you want all the detail, and some journal articles are in the works. But in our research we are also committed to making findings available to wider audiences. Our prize last year recognising â€˜impactâ€™ highlighted this approach. So we have produced some more popular outputs, including a series of much-viewed films (they are short â€“ just 10 mins or less) that I have mentioned on the blog before. The films have been shared in showings in the study areas, and DVDs have been circulated to agricultural offices, training centres, schools and so on. And for those with good enough Internet connections they can be viewed online via youtube (there are hi and low res versions). At the end of last year we produced a booklet summarising the findings, and offering some case studies of how people have engaged with these changing markets, paid for in part by our prize money.

The booklets are in Shona and English, and are available to download here (scroll down to get the new booklets â€“ theyâ€™re blue, and uploaded in low res quality so they are feasible to download). They complement our earlier booklets that offered an overview of the findings presented in our 2010 book (these are the green ones!). These proved a massive hit in our study areas, and â€˜reading circlesâ€™ were formed to share them across villages in Masvingo.

As before we have produced a large print run of the colour booklets. In November-December we distributed over 1500 to our field sites in Mvurwi, Masvingo, as well as Masvingo. These were handed out to the villagers we have worked with over the years, as well as officials in Agritex offices, local government, private sector businesses and others. Not only were people delighted to see themselves and friends and family in the photos, but they were appreciative of the effort to feedback and share results. There have been many conversations of our findings since.

There is much talk about â€˜impactâ€™ these days in research circles. Itâ€™s become an obligation to demonstrate impact, uptake and so on, but these edicts are often followed rather reluctantly. In the last UK national research assessment exercise, university researchers had to produce â€˜impact case studiesâ€™. Many were excellent, but there were a few where it was clear that researcher were scraping at the bottom of a rather empty barrel. Much of the research impact business is also rather mechanical. There are endless guidelines, tedious workshops, toolkits and yes inevitably consultants to help you with the process. And so often â€˜impactâ€™ efforts are added on after the event, with the funding body deciding (after being critiqued) that they need to â€˜do impact workâ€™ on research that has already been done, and with a group of people who are not really ready to do it.

But in my view with â€˜engagedâ€™ research (another buzzword), itâ€™s an ethical obligation to feedback, link with research users and find ways that your research has resonance â€“ and from the very beginning of all research efforts. Impact may not be immediate, and may require years and years of engaging before a moment arises when the research becomes relevant and useful. It may also be highly unexpected, with engagements from unusual sources. This is the problem with the approach to â€˜compulsoryâ€™ impact, as people are forced to demonstrate impact and uptake in rather inane ways, when actually it wasnâ€™t appropriate.

I am in the lucky position of working with an amazing group of people in Zimbabwe and over a long period of time. This is how we can have impact, but it is slow, patient and cumulative, and requires multiple strategies. These booklets are our latest effort: do read them!