â€œOur new nation requires of every one of us to be a new man, with a new mind, a new heart and a new spirit. Our new mind must have a new vision and our new hearts a new love that spurns hate, and a new spirit that must unite and not divide. â€œ (Mugabe, Independence Speech,1980) 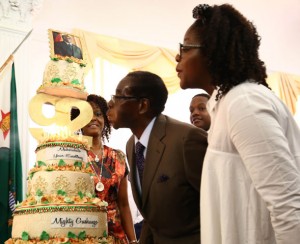 â€œLet us recognise that although we may differ, although we may have different affinities, there is room in our country for all of us and that must be recognised, that is the right of self determination, we work together, we allow democracy to have its role in society and accept the rule of law and the fact that we have a Constitution.â€ (Mugabe, 92nd birthday speech, 2016)

An uninformed reader would comment: This person has remained faithful to his beliefs because what he said in 1980 and 2016 seems to tally and be one and the same. But an informed person can only marvel at such a level of hypocrisy. The same person who preached a new spirit of love at independence did exactly the opposite for the past 36 years, namely to divide us into racial, ethnic and political enemies through cheap political propaganda and ruthless repression so as to stay in power for life. He has proved to be a master at â€˜divide and ruleâ€™, not invented but certainly perfected by him. Polarisation of our society is the result whereby we do not trust the person next to us anymore but easily see enemies all around us. One only has to look at the multitude of political parties that have emerged as a result of that polarisation.

There has been much speculation about whether Mugabe is still in full control of his own mind as well as the nation as a whole. One can certainly doubt the latter, but not the fact that he still knows what democracy is all about and the values of unity and peace as expressed in his recent speech. This makes him a worse hypocrite – someone who knows or pretends to know what is right but does exactly the opposite. To speak of a â€œnew spirit that must unite and not divideâ€ and yet make every effort to turn the small population of Zimbabwe into enemies of each another is more than unforgivable. We should never forget Gukurahundi in the early 1980s where thousands were brutally murdered in Matableleland, nor the increasing violence and torture of opponents during elections since 2000 culminating in the murder of hundreds during the 2008 elections. We should never forget the displacement of nearly one million people during Murambatsvina in 2005, nor the disappearance of unwanted persons over the years with Itai Dzamara being the most recent example. A fool who does not know better, can be forgiven for his folly. But a political leader who has all the right insights yet does the exact opposite so as to stay in power cannot be tolerated nor easily forgiven but needs to be held to account for his actions.

In all that Mugabe has done to this nation, the worst has always been his absolute lack of respect or rather disdain for the people of Zimbabwe who, he seems to believe, cannot think for themselves. The best example of that is his mouthpiece â€“ ZBC – which tells us constantly what to think, believe and cherish in total disregard of our intellect and ability to make up our own mind. We are told on ZBC that â€œThe nation looks forward to celebrating the Presidentâ€™s birthdayâ€ â€“ what an insult to us who consider it in extremely bad taste, if not outright cruel, to celebrate with a giant birthday cake and expenses of nearly 1 million dollars in a part of the country where people are starving yet are forced to contribute to those nauseating celebrations. $1 mill could have fed how many for how long?! The youths are lambasted by the birthday boy for taking mbanje and disrespecting elders! Who could blame them to take drugs so as to forget their misery for a while in a country which is denying them a future! Why should they respect elders who in public use hate language against each other and are only interested in accumulating wealth and power for themselves? What respect, I ask, do they deserve?

What we need is just that: respect for one another â€“

and last, but not least, respect for the rule of law, and for unity, peace and justice which can only be achieved by upholding and enforcing democratic principles.