THE government has defended the imposition of spot fines on licenced motorists who would have been stopped at police road blocks while driving without the documents on their persons. 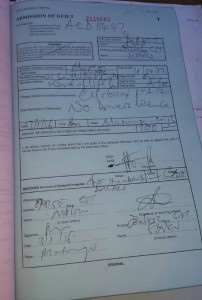 Homes Affairs deputy minister Obedingwa Mguni told Parliament last week that the $20 fines imposed on the motorists save the law enforcement agents the often burdensome and costly business of tracking down traffic offenders.

Mguni had been asked by backbenchers during last Wednesdayâ€™s question and answer session if the government has rescinded its policy of allowing motorists a seven day grace period to produce a valid driving licence to police.

â€œShe is 100% correct that without a licence you can be given seven days to produce it,â€ Mguni said.

â€œHowever, the police have had challenges where bogus addresses have been given to them. People are renting some houses and they transfer immediately after committing an offence.

â€œSo, we have found that it costs the police to track the $20.00 ticket. It is not cost effective to go around looking for a person who has got an offence of $20 against $100.00 fuel that will be used.

â€œSo, the law can be changed but in the interim there is an operation memorandum that has been issued to say people can pay a certain amount.â€

MPs were quick to question the apparent policy summersault by government in a case where laws were supposed to first go through parliamentary scrutiny before being unleashed on the public.

However, Mguni, who was appointed to the Home Affairs Ministry during a cabinet reshuffle last year, stuck to his guns, saying police have a right to demand the spot fines.

â€œ… There is nothing that is against the law which I have mentioned.

The police will have the right to demand the payment using their own discretional powers… constitutionally, they have that right,â€ said the Mangwe legislator.

ZRP has come under fire for disobeying the countryâ€™s laws, in some cases acting in contempt of court orders.

Officially opening the 2015 Masvingo High Court Legal Year, Justice Francis Bere said there was neither a legal framework nor any law which either compelled a motorist to pay a spot fine or which empowered police to impound someoneâ€™s vehicle.

â€œI fully understand the predicament the Home Affairs Ministry finds itself in, but it occurs to me that currently there is no legal framework justifying the manner in which these collections are being done.

â€œThere is no law which compels a motorist to deposit a fine with the police if he desires to challenge the alleged offence, but it looks like the motorists are being forced to pay these fines on our public roads irrespective of their attitude to the charges.

â€œAny attempt to refuse to pay is met by threats to have the vehicle impounded by the police.â€™â€™

Elsewhere, police have been accused of unilaterally banning planned demonstrations by the opposition and civil society activists in defiance of the countryâ€™s security laws which say they must only be informed of planned marches as opposed to being asked for permission.