The Zimbabwe Human Rights NGO Forum (the Forum) is gravely disturbed by the increasing political tensions manifesting as hate speech in the country and celebration of tribalism. The Forum is further worried about the heavy handedness of the Zimbabwe Republic Police when dealing with dissent. 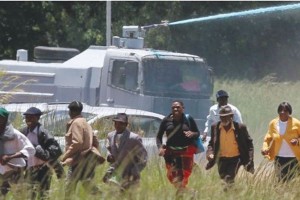 The violent dispersal of the war veterans gathering by the police on Thursday the 18th of February 2016 was unnecessary. There were no reports of violent expression from the War Veterans’ which warranted this drastic approach. Besides, their actions were protected by Section 58 of the Constitution which provides for freedom of assembly and association. These civic liberties should be enjoyed by all Zimbabweans irrespective of differences in points of view.

From the beginning of this year, police heavy handedness on citizens exercising their right to demonstrate and protest has been noted. On 4 January 2016 activists from Zimbabwe Activists Alliance, ZINASU, Hospital Doctors Association Zimbabwe Nurses Association and Rural Teachers Union of Zimbabwe (RTZU) demonstrated in the Central Business District of Harare, against the non-payment of their salaries by government. The demonstrators, consisting of 150 vendors, activists, nurses, doctors and teachers union members, were beaten up by police with baton sticks, booted feet and fists causing injuries for three members who went on to seek medical treatment.

On 5 January 2016 commuter omnibus operators protested against a $100 operation fee imposed on them by Chitungwiza Municipality. The police responded the military way. The police moved from house to house, damaging property and indiscriminately assaulting all males and even children. Over 30 people sustained injuries from the assaults. On February 13 , police also beat up some activists that were marching peacefully in Harare to mark Valentine’s day. Two people were hospitalised.

Heavy-handedness of police when controlling demonstrations results in injuries. This violates Section 53 on Freedom from torture or cruel, inhuman and degrading treatment and punishment. It also violates Section 59 on the Freedom to demonstrate and petition.

The Forum also condemns leaders who use hate speech at political gatherings and also in the print, electronic and social media platforms. The Forum is also calling upon the media to desist from being used as conduits for hate speech and calls upon the media to report responsibly in the interest of national peace and reconciliation.

Thus, the Forum obligates “The State and every person, including juristic persons, and every institution and agency of government at every level must promote national unity , peace and stability” through responsible statements and respecting the citizen’s rights and the Constitution .