WAR VETERANS who engaged in running battles with police in Harare, Thursday, following a botched indaba, say their rights have been violated and will soon be approaching the High Court for recourse. 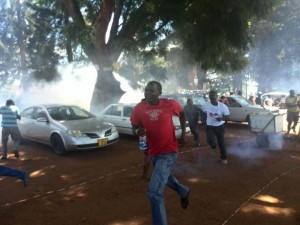 Christopher Mutsvangwa, the minister responsible for the welfare of the former liberation war fighters and is also the groupâ€™s chairperson, said consultations were underway with a view to making a court bid to stop the police from violating their rights.

â€œThe feeling among the membership is that the police are violating our constitutional rights and yes we are taking that route (going to court),â€ Mutsvangwa said in an interview.

He said also involved in the consultations were the countryâ€™s military establishment under whose ambit the ex-guerrilla fighters fall.

â€œWe are doing all preliminary consultations as an organ of the party (Zanu PF) as well as within the ambit of the defence and security establishment,â€ Mutsvangwa said.

â€œMy heart bleeds for those whose rights have been violated. War veterans were last armed 35 years ago and the state’s heavy handedness in dealing with them was unwarranted,” Mutsvangwa.

Police used brute force to disperse war veterans who were converging in Harare for a meeting as the succession conundrum continues to gnaw at President Robert Mugabeâ€™s governing party.

In the past few days, Mugabe’s wife Grace, with support from a group of party members going by the name Generation 40, has taken the factional fights a notch up demanding that Vice President Emmerson Mnangagwa declare his interest in Mugabe’s throne.

Mnangagwa has not personally responded but his supporters mainly in the Zanu PF Youth League as well as the countryâ€™s feared military have, through the war veterans, responded in equal measure telling Grace to “go home and cook for your husband” and describing her as a “young girl” when it comes to the country’s politics.

For his part, Mugabe has been somewhat indifferent to the squabbles, convening a Cabinet meeting as usual on Tuesday which insiders said went on as if it was “business as usual”.

As Mutsvangwa mourned police brutality, members of the public took to the social media to express their joy.

For over a decade now war veterans have been Mugabe’s key allies, often acting with impunity in the aged leader’s name.

In the early 2000’s, the former liberation war fighters led violent farm invasions which saw the displacement of hundreds of white commercial farmers and thousands of their black workers. Many were brutally murdered while others disapeared for supporting the MDC. Known war veterans who committed those crimes have never been arrested.Â