WAR veteransâ€™ leaders axed last week came out guns blazing Monday, rejecting their dismissals and lambasting vice president Phelekezela Mphoko who has lived in hotel at government expense for more than a year. 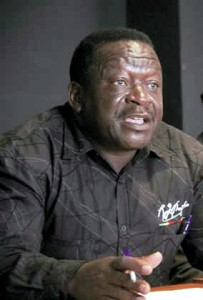 Hitting back at G40 … Victor Matemadanda

â€œZimbabweans are suffering; we did not go to the war and sacrifice our lives so that leaders come back and live in luxury while the masses struggle,â€ said Zimbabwe National Liberation War Veteran Association (ZNLWVA) secretary general Victor Matemadanda at a press conference in Harare.

Clearly targeting Mphoko, Matemadanda added: â€œToday you are sitting pretty and behaving like a spoilt child to the extent of rejecting houses bought for you by government, demanding a mansion instead.â€

Matemadanda and Mutsvangwa were hounded out for backing the VP and publicly attacking G40 ministers.

Prior to the war veteran leaderâ€™s sackings, Grace staged a rally at Chiweshe where she savagely attacked Mnangagwa.

The rally followed a politburo meeting in Harare where the First Lady and her allies brought the capital thousands of supporters and used the stage to again hit out at Mnangagwa.

But Matemadanda said ruling party legislator Sarah Mahoka who warned Mnangagwa he risked a nasty death had been paid $50 to stage the stunt.

â€œA real war veteran shouting a slogan as if you will break your lips just to please someone who transferred $50 to your mobile phone through EcoCash.

â€œNow you are ignoring the suffering that you went through during the liberation struggle because of those peanuts,â€ charged Matemadanda.

His speech was punctuated by shouts of â€˜Sarah Mahoka! Sarah Mahoka!â€™ from other war veterans at the press conference.

â€œSo we were stupid and dull to go to war? Just enjoy our sacrifice without scolding us,â€ he said.

â€œIt is the time now to tell Zimbabweans what is really going on in the ruling party as there is a lot of lip service to the suffering of the masses while some people are being rewarded for corrupt activities.â€

Matemadanda said Grace and her allies were welcome to enjoy the fruits of the thousands who fought to liberate Zimbabwe but should be careful not to demonise the former fighters.

â€œYou are enjoying the good life and eating good food.

â€œYou are so lucky to be where you are today; leave us alone wallowing in poverty,â€ he said to shouts of â€˜Grace! Grace! Grace!â€™ from other war veterans.