OPPOSITION PDP secretary general Gorden Moyo has chided some western countries for giving up on their principles through alleged cash contributions towards President Robert Mugabeâ€™s birthday bash, which the party says was too extravagant for a starving nation. 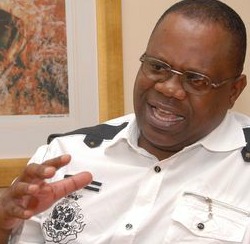 Until the 2013 elections which saw Zanu PF restore its yester-year dominance in local politics, the West had pursued a policy of isolation against the Harare regime for alleged misrule.

Relations have since thawed as was demonstrated through recent moves towards possible reengagement between the Zanu PF-led administration and its former critics.

However, Moyo has chided the former opposition allies for lowering the bar in efforts to catch up with competitor, China, whose unconditional ties with resource rich Africa and her dictatorships has helped it become the globeâ€™s second largest economy.

This, Moyo said, could never have been demonstrated better than the western countriesâ€™ secret donations towards the Zanu PF December congress and, lately, Mugabeâ€™s 92nd birthday bash, estimated to cost close to a million dollars.

The countries, he continued, have also gone on to support certain Zanu PF individuals during the current stampede to succeed President Mugabe.

â€œFor now, we will not name and shame the culprits who have secretly and handsomely contributed to the Zanu PF congress in December 2015 as well as to the forthcoming 21st February Movement celebrating Robert Mugabe who is currently at his advanced vegetative stage,â€ Moyo said in a statement.

â€œWe hope these countries will soon realise that by supporting any of the factions, fractions and fragments of Zanu PF, they are essentially financing anarchy and civil strife in Zimbabwe.â€

Moyo said it was not surprising Europe was acting that way, having pampered Mugabe when it suited it soon after independence when the same leader presided over killings on 20,000 civilians in Matabeleland and Midlands provinces.

The period is widely known as the Gukurahundi massacres.

â€œIn fact, the West never raised a finger when Mugabe set his Gukurahundi dogs to kill, maim and rape women, children and the elderly with impunity,â€ he said.

â€œAt the time Mugabe served the interests of the west. Apparently, the lives of the people were dispensable and killable on the altar of business and commercial interests of neoliberal policies.

â€œAs long as Mugabe served the western interests against soviets, his Gukurahundi policy did not matter. Economy was more important than humanity.

â€œToday, history is repeating itself. Some western countries feel that there are losing business to China in Zimbabwe by insisting on democracy. Their belief is that they should embrace a faction of Zanu PF that is likely to succeed Mugabe.â€

The former state enterprises minister warned that Zanu PF will never reform under any Mugabe successor and urged the West and the broader progressive world to stand with suffering Zimbabweans.

â€œItâ€™s too late for Mugabe to reform Zanu PF just as it is too late for Satan to be forgiven and return to heaven,â€ he said.

â€œ…AU, Sadc, UN, EU and the west in general are being asked once again today by PDP just like Zapu did in the 1980s, to stand with the suffering peoples of Zimbabwe as they navigate their way out of the murky waters of the imperial presidency of Robert Mugabe.â€

His comments follow similar ones by PDP leader Tendai Biti who described the West as stupid for warming up to Mugabe.

The current stance by the opposition has indicated growing unease with its former benefactors who are also said to be considering options of supporting the opposition only if it all comes under ousted Vice President and former Mugabe ally Joice Mujuru who has formed a party.