WHILE other villagers are gathered at Chikwekwete Primary School in ward seven in Buhera district receiving government free bags of maize, Susan Gurajena aged 38 (not her realname) is picking wild fruits in the mountains, as she is being denied food aid because she is an MDC-T supporter led by its leader Morgan Tsvangirai. 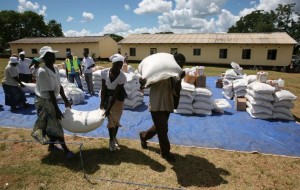 At her homestead, her son is aged three, but looks like a frail six-month old baby, as he wrists the dark hollows under his solemn eyes with sores on his face.

It makes a heart throbbing sight as the son flops in his mother’s arms like an exhausted old man ready to be fed the wild fruits.

Gurajena and her son are victims of Zimbabwe’s hunger crisis that has been exacerbated by the rising politicization of governmentâ€™s free food aid distribution.

The twin miseries of crop failure and economic collapse have left Zimbabwe’s villages without food. Millions survive on nothing but wild fruit and many who are labeled as MDC-T supporters have suffered.

The calamity has been aggravated by President Robert Mugabe and his Zanu PF politicians who have a protracted history of denying food to opposition areas and are using hunger as a political tool to force people to vote for Mugabe and his allies to power.

“The food always ends up in the hands of Zanu PF. The guys in charge of distribution are Zanu PF and I am an MDC-T supporter, so this is where the problem is. Zanu PF supporters get the food first and MDC-T supporters do not have anything at all,” says a tearful Gurajena.

She is one of many villagers who have lost cattle and crops in the severest drought that has hit the country.

According to Anna Moyo (not her real name) of Buhera West Constituency won by former national police spokesman Oliver Mandipaka, the distribution of bags of maize to the people in Ward 5 has been politicized as presumed MDC-T supporters like her do not receive anything.

â€œItâ€™s better for the government to stop the whole process of helping us with food because there is segregation,â€ she said.

MDC-T supporters in Buhera District are being sidelined on receiving the free government food aid as punishment for supporting the opposition party â€“ Zanu PF.

This came out during the food distribution exercise at Kufakwatenzi Primary School in Birchenough Bridge recently where Zanu PF activists hijacked the exercise.

In an interview, the ward 33 councillor Albert Mabika (MDC-T) said MDC-T supports were being denied food aid on political grounds.

â€œWe are surprised that the food distribution exercise is being politicized. I am the councilor here but Zanu PF ward chairman and his deputy including war veterans have taken the duty of distributing the food,â€ said Mabika.

Mabika said that the three had ignored a list of beneficiaries that had been compiled by the village heads.

â€œIn actual fact they are have come up with a list that is full of Zanu PF supporters. They have also included their relatives and friends on the list ignoring the suffering MDC-T supporters,â€ he said.

Addressing a gathering at a recent food distribution exercise at Kufakwatenzi Primary School Muchini said: â€œMDC-T can never rule this country. It is us the Zanu PF members who are responsible for distributing food. We are here today because of Zanu PF. You are receiving this food because of Zanu PF. This food belongs to Zanu PF supporters only. If you are not from Zanu PF you will not receive this food.â€

It is the same story in ward seven where war veterans have also hijacked the food distribution exercise.

The councilor, Dickson Mugwagwa (MDC-T) said only Zanu PF supporters were getting the food.

â€œThis issue must be solved as soon as possible because the MDC-T supports here will die of hunger,â€ said Mugwagwa.

In an interview, the MDC-T Manicaland spokesman Trevour Saruwaka said the free government distribution exercise must be rolled out strictly according to government policy.

â€œThe government policy is very clear that all hunger affected citizens should benefit from the food aid. The police must ensure that all those Zanu PF activists who are masquerading as government officials are arrested,â€ said Saruwaka.

â€œOnly an evil regime can allow food to be used as a tool for political campaign. Zanu PF must stop this barbaric and stone age behavior and realize that we have a constitution that criminalizes such discrimination,â€ he added.

He appealed to the government officials and traditional leaders in affected areas to act responsibly and ensure that all deserving cases are treated impartially in order to avert the increasing hunger in Manicaland.

According to the United Nations World Food Programme (WFP), over 1.5 million people who make up about 10 percent of the total population in Zimbabwe are currently facing hunger.